Kolkata: Opener Jalaj Saxena hit a second successive century of the season to put Kerala in the driver’s seat against Bengal on day two of their Ranji Trophy 2018-19 Round 3 Elite Group B match at the Eden Gardens on Wednesday.

Starting at overnight 14 with the team’s score at 35 for one, Saxena stood tall in a glittering 143 from 190 balls (21x4s, 2x6s) as Kerala surpassed Bengal’s first innings score of 147 in the opening session before notching up a sizeable 291 in 83 overs.

In their second essay, Bengal lost opener Koushik Ghosh (1) cheaply to be five for one in 2.2 overs still needing 139 runs to avoid a first innings defeat with two complete day’s play remaining.

“It’s very satisfying to see where we are standing right now, despite having started off as underdogs,” Saxena told reporters at the end of second day’s proceedings.

Saxena not only held the Kerala innings together en route to his 14th first class century, but counter-attacked Mohammed Shami with both his sixes coming against the Australia-bound India pacer.

The BCCI had cleared Shami, India’s highest wicket-taker in Tests so far this year, to play the match subject to him bowling not more than 15-17 overs in an innings.

But the star pacer ended up bowling 26 overs returning with 3/100 that aptly summed up Bengal’s misery after they opted for a green top in their effort to register the season’s first win.

Fresh from his match-winning 133 and nine-wicket match haul against Andhra, Saxena looked full of optimism in his third season for Kerala.

The 31-year-old stood in three 50-plus partnerships, including a 119-run stand with Vasudevan Jagadeesh for the sixth wicket that took the team past 200 in the second session.

Earlier on a hazy morning, Shami started off with a bouncer to Saxena and followed it up with another short delivery. The Kerala opener stayed calm and made his intentions clear playing an upper cut over backward point boundary as the ball had to be replaced.

In the next over, Saxena launched Shami over point boundary for his second six as Kerala got off to an attacking start. He added quick 52 runs for the second wicket with left-hander Rohan Prem.

Ashok Dinda gave the breakthrough in the fourth over of the day with a bouncer to dismiss Prem, who went for a pull only to get a faint edge behind the stumps.

The only time Saxena looked in a bit of worry was on 29 when Dinda’s huge appeal for a caught behind was turned down.

Shami was introduced again in the 51st over with Saxena in 90s but the latter continued to play freely and completed his century from 143 balls in the 56th over.

Ishan Porel (4/69) finally broke the partnership dismissing Jagadeesh and Saxena on either side of the tea break. But Bengal bowlers still struggled to wrap up the issue with Akshay Chandran playing a rearguard knock and remained unbeaten on 32.

Porel, who was the most successful Bengal bowler, said they still have hopes for a win. “We scored 500 runs in our last match. We are confident to take a lead. There’s no negativity in the team. We just want one good day,” Porel said.

Porel said Kerala had the advantage of winning the toss. “The situation may have been different (had we won the toss). We could have bowled them out lesser than 147,” Porel said. 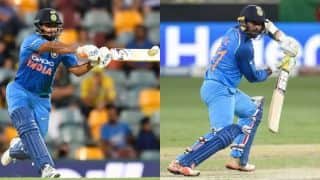