Rain played spoilsport washing out proceedings on the third day on Thursday.

Rain played spoilsport washing out proceedings on the third day on Thursday.

Resuming at 122 for 3 in reply to Andhra’s first innings score of 216, Tamil Nadu suffered an early jolt when N Jagadeesan (10) fell for the addition of just two runs to the total.

Aparajith and B Anirudh Sitaram (17) added 34 runs to set the tone in the quest for a lead. Later, Aparajith and Kousik put on 43 runs before a mini collapse set back TN. Kousik was dismissed by Imandi Karthik Raman with the team two short of Andhra’s score. Sai Kishore and K Vignesh (10) added 39 runs to first help Tamil Nadu overhaul the rival score and also extend the lead.

Andhra was 8 for no loss in the second innings. 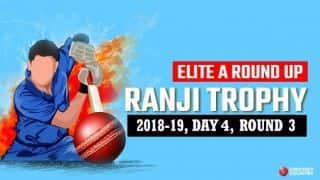 Ranji Trophy 2018-19, Elite A, Round Three, Day 4: Aditya Waghmode’s twin centuries in vain as Vidarbha run away with three points