Pradhan claimed 7/40 in 13 overs to outdo his previous best and help bowl out Tripura for 122.

A career-best bowling performance from Suryakant Pradhan put Odisha in command over Tripura in Cuttack, where day one of their 2018-19 Ranji Trophy Elite Group C round four match ended with the hosts in sight of the first-innings lead.

Basant Mohanty set the tone for Tripura s poor innings by bowling Udayan Bose for 0 but it was Pradhan, 25, who spoiled their day. Starting with the wicket of Ninad Kadam, the medium-pacer triggered a collapse of three wickets for four runs up front and then three wickets for four runs in his second spell. From 20/1 the visitors slipped to 24/3 and then after a 30-run stand between Bishal Ghosh (9) and Pratyush Singh (43) the score went from 55/4 to 54/7.

The loss of Anurag Sarangi for a three-ball duck and Govinda Poddar for 4, both to Manisankar Murasingh, gave Odisha from early strife but Rajesh Dhuper (31) and Subhransu Senapati steered Odisha out of trouble with a stand of 41 until the former was lbw to Ajoy Sarkar.

Senapati was batting on 36 at stumps with his captain Biplab Samantray on 19. 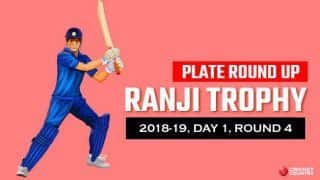 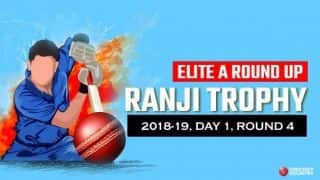