Veteran batsman Suresh Raina and Priyam Garg hit fifties to guide Uttar Pradesh out of troubled waters as the hosts ended the second day of their Ranji Trophy 2018-19, Elite C, Round 6 clash against Jharkhand at 173/4, trailing by 181 runs.

At stumps on Saturday, Raina was unbeaten on 65 off 89 and had Rinku Singh for company who was batting on 22.

After resumption at the Atal Bihari Vajpayee International Cricket Stadium, Lucknow, Shahbaz Nadeem recorded his maiden first-class century while Ishank Jaggi missed out on his own by just five runs. The pair added 50 more runs to their team’s overnight tally of 278/6 before being separated.

The duo continued from where they had left on the opening day with both the visiting batsmen all set to record centuries. However, Dhruv Pratap Singh got rid of Jaggi for 95 to break the 171-run stand, bringing his team a massive relief while also completing his five-wicket haul.

But Nadeem went on to score 109, an innings that featured 14 fours, before Dhruv’s sixth victim. Their The final two wickets fell without disturbing the scoreboard as Jharkhand ended on 354-all out in 117.1 overs.

Considering how their opponent’s lower order fared, UP would have great expectations from their top-order. But paceman Rahul Shukla had other plans as he knocked down their openers inside eight overs. Varun Aaron then trapped captain Akshdeep Nath for 13, leaving UP 45/3. Priyam and Raina got together to stabilise the innings, hitting fifties apiece. They added 83 runs for the fourth wicket before Priyam was removed by Nadeem on 54.

Raina continued his brisk innings and has so far struck nine fours and a six. 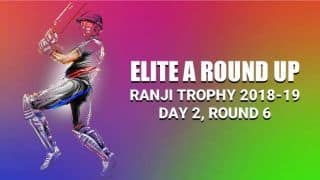