This is Pandya s third five-wicket haul in first-class cricket and second for Baroda.

The India allrounder Hardik Pandya has marked his return to competitive cricket with a five-wicket haul for Baroda in their 2018-19 Ranji Trophy game versus Mumbai.

After taking 3/74 on day one as hosts Mumbai ended the opening day at 439/8, Pandya on Saturday added the wickets of Akash Parkar and Royston Dias to end the innings on 465. He finished with figures of 18.5-1-81-5.

This is Pandya s third five-wicket haul in first-class cricket – and first since he claimed 5/28 in a Test against England this summer – and second for Baroda.

ALSO READ: Priority is to get fit and return to play for India: Pandya

In September, the 25-year-old suffered a back injury during the Asia Cup in the United Arab Emirates and had to be stretchered off the field. He underwent rehabilitation and was not available for the ongoing Test series in Australia. 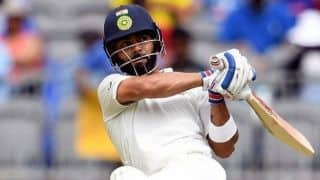