Delhi's season continues to be on the downward spiral after a crushing defeat to Kerala at the St Xavier's College Ground in Thiruvananthapuram.

Delhi‘s season continues to be on the downward spiral after a crushing defeat to Kerala at the St Xavier’s College Ground in Thiruvananthapuram on Sunday.

On the third morning of their Ranji Trophy 2018-19, Elite Group B clash against Kerala, Delhi folded for 154 in their second innings with the hosts winning by an innings and 27 runs, their third win of the ongoing season.

Suboth Bhati and Shivam Sharma put up a late resistance as they spared their team the embarrassment of being bowled for under 100 runs. They added 54 runs for the eighth wicket after Jalaj Saxena got rid of overnight pair of captain Dhruv Shorey (17) and Anuj Rawat (31) early in the day.

From 83/7, the pair took Delhi to 137/7 before Sijomon Joseph broke them apart with the scalp of Suboth who scored 30 off 34 before being bowled.

Saxena then picked up a third wicket in Shivam who was out after scoring 33 off 56 before Sijmon completed the formality by removing last man Akash Sudan to finish with 2/29.

Jalaj ended with figures of 3/49 to take his match haul to 9/88 and was chosen as the player of the match. He had also scored 68 to help Kerala to 320-all out in the first innings.

It was Delhi’s third defeat of the season and their search for a first win continues. 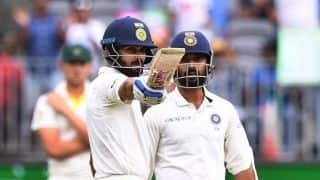