Himachal Pradesh‘s Nikhil Gangta and Rishi Dhawan stonewalled Delhi on the fourth and final day of their Ranji Trophy 2018-19, Elite Group B, Round 2 match at the Feroz Shah Kotla to ensure a draw. With nine wickets separating them from win, Delhi started the day as the favourites but Gangta (66*) and Dhawan (52*) stitched an unbeaten 82-run partnership with Himachal Pradesh finishing on 266/5 in their chase of 376.

But the hosts began on a positive note getting rid of Ankush Bains (36) and opener Priyanshu Khanduri (29) within the first hour of play before losing steam.

Gangta scored 66 off 184 with six fours as he stitched important partnerships to steadily end Delhi’s hope of an outright win in their season opener. At 74/3, he first found Sumeet Verma (43) with whom followed a 71-run partnership. Vikas Sharma broke that stand and then senior pacer Ishant Sharma fanned Delhi’s dying hopes by having Ekant Sen (18) out caught behind.

At 184/5, the match was poised for a close finish but Dhawan dropped anchor, hitting unbeaten 52 off 110, an innings which featured eight fours.

Their resistance ensured Delhi could pocket only three points while ensuring they return home with one point. 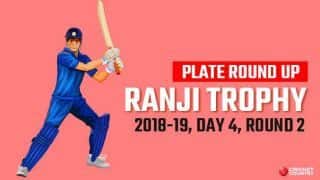