Tanmay Agarwal and captain Akshath Reddy struck half-centuries to help Hyderabad consolidate their lead to 169 runs against Punjab on Day 3 of their Ranji Trophy 2018-19, Elite Group B, round 7 clash at the Rajiv Gandhi International Stadium.

At the close of play, the hosts had reached 155/2 with Akshath unbeaten on 67, having stitched an unbeaten stand of 68 runs for the third wicket with Bavanaka Sandeep (25*).

Mayank Markande had given Punjab an early success when he removed opener Rohit Rayudu for 8. However, Tanmay scored 54 with three fours and a six to settle the nerves while adding 68 runs for the second wicket with his skipper.

Punjab suffered a collapse earlier in the day after starting the morning session on a solid footing. The overnight unbeaten pair of Mandeep Singh and Gurkeerat Singh took them to 274 before a lower order capitulation. Ravi Teja triggered the slide with the scalp of Mandeep on 63.

They lost their last six wickets for the addition of just 24 runs with four of them recording ducks. 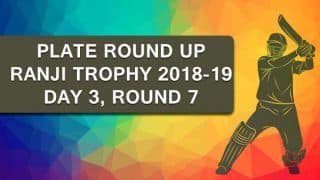