Mumbai and Karnataka are on the eighth and ninth spots respectively.

Belgaum (Karnataka): Both Mumbai and Karnataka will be eyeing their first victory of this Ranji Trophy 2018-19 season when the two sides clash here from Tuesday in their Elite Group A match.

Mumbai drew the first game of this season against Railways in New Delhi, but more importantly they earned three crucial points as they took the first innings lead.

Same was the case with Karnataka, who grabbed three points after settling for a draw with Vidarbha at Nagpur after taking the first innings lead.

Mumbai, led by pacer Dhawal Kulkarni, have a strong batting line-up, despite the absence of Rohit Sharma, Ajinkya Rahane or Prithvi Shaw, who are all on the national duty.

For Mumbai, a lot will depend on how their crisis man Siddhesh Lad performs. Lad has been eyeing a national berth for a long while now and another good outing will only build his case.

Other regulars Akhil Herwadkar, Suryakumar Yadav, Jay Bista and experienced wicket-keeper and former skipper Aditya Tare will have to play their roles to perfection.

Tare roared back to form with a 100 against Railways and would be keen to add more runs under his belt. Dashing allrounder Shivam Dube is also scoring runs and Mumbai would be hoping that he gets another big knock tomorrow.

On the bowling front, Kulkarni has the support of pacer Tushar Deshpande, besides spinners Karsh Kothari and Shams Mulani. If both the spinners play, then medium-pacer Aakash Parkar is likely to sit out.

Karnataka, led by Vinay Kumar, also have strong players and they would also be keen to beat Mumbai on their home turf.

Matches between these two competitive sides have produced memorable moments in the past and another humdinger is expected.

Presently on the points table, Mumbai and Karnataka are in the eighth and ninth spots respectively, and a win would be handy for both the sides.

In the other matches of the Elite Group A starting Tuesday, Chhattisgarh take on Railways in Raipur, Gujarat clash with Saurashtra in Nadiad, while hosts Vidarbha will play against Baroda in Nagpur. 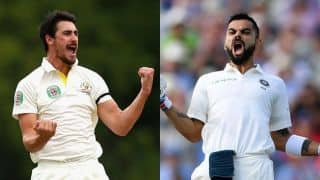 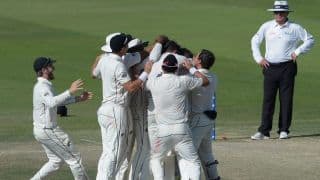