Aman improved on his previous best he achieved last match when he pocketed seven wickets against Arunachal Pradesh.

Left-arm spinner Ashutosh Aman, who registered his best bowling figures in an innings after pocketing seven wickets in his previous match against Arunachal Pradesh, improved on his showing to return with eight wickets to put Bihar on top against Meghalaya in their Ranji Trophy 2018-18 Plate group Round 6 match at Shillong on Friday.

Opting to bat, second-placed Meghalaya lost opener W Nongkhlaw after he gave a simple catch by to Aman and departed for three. No. 3 batsman JJ Lamare was trapped by Samar Qadri for 1. Aman then returned to pick the next three wickets of Punit Bisht (12), Yogesh Nagar (1) and RR Biswa, who scored a fighting 56 off 105 as Meghalaya slumped to 80/5 after 33 overs.

Abhay Negi added 38 off 60, but received no support at the end with as many as eight Meghalaya batsmen departed with single-digit scores. Aman returned with staggering figures of eight for 51 in his 22.5 overs.

In reply, Bihar lost both their openers and ended the day at 80 for two. Indrajit Kumar was dismissed in the first over after he was trapped leg before by Lakhan Singh, while his partner Kumar Rajnish added 20 and was sent back by Gurinder Singh. Captain Babul Kumar (43) and Keshav Kumar (16) ensured no further damage was done to the wickets column with the duo involved in an unbeaten 31-run partnership when stumps were drawn. 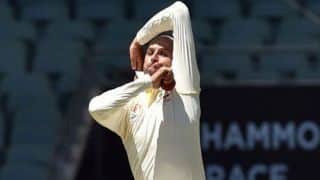 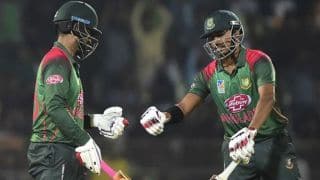