Gurinder Singh registered career-best figures of five for 15 after Mizoram folded for 86.

Meghalaya hardly broke a sweat to crush bottom-placed Mizoram to secure a massive 206-run lead on the opening day of Round 7 of their Plate group Ranji Trophy 2018-19 match at Shillong on Thursday.

Mizoram were wrapped up for a paltry 86 with left-arm spinner Gurinder Singh registering career-best figures of five for 15 after being put into bat.

ALSO READ: Cannot digest the fact that I won’t be part of IPL 2019: Manoj Tiwary

In reply, Meghalaya, placed fourth in the group, were helped to 292/4 at stumps with Yogesh Nagar unbeaten after a thunderous batting display that saw him tonk 15 boundaries during his 84-ball 91. Gurinder made it count as the bat and provided good support to Nagar with a run-a-ball 52 as the duo were cruising on a 107-run partnership for the fifth wicket.

Meghalaya lost both their openers early with Raj Biswa departing to Sinan Khadir for 27, while Lakhan Chhetri was cleaned up by Taruwar Kohli for 19.

Earlier, as many as nine Mizoram batsmen registered single-digit scores with five failing to trouble the scorers on a humiliating batting display for the visiting side. HM Ralte top scored with 40, while opener Akhil Rajput scored 20. 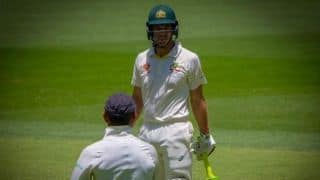