With the result, Gujarat have retained their second spot with 18 points after six matches, while Karnataka have slipped to fourth with 15 points in five games.

Karnataka bagged three points by virtue of a first-innings lead after their Round 6 Elite A Ranji Trophy 2018-19 match against Gujarat ended in a draw at Surat on Monday.

With the result, Gujarat have retained their second spot with 18 points after six matches, while Karnataka have slipped to fourth with 15 points in five games.

Resuming their second innings at 187/3, with a lead of 14 runs, Gujarat folded for 345 to set Karnataka 518 runs to win. Rujul Bhatt, overnight on 82, added nine more before he fell to Krishnappa Gowtham. Dhruv Raval was the next to depart for 30 off Ronit More. Axar Patel added 22 after he perished to R Samarth for 22.

Manprit Juneja batted with the tail to notch a fine 98 before he was denied his century by Gowtham, who had accounted for the wicket of Piyush Chawla three overs earlier. More then wrapped the innings dismissing Arzan Nagwaswalla for 2.

More and Gowtham were the pick of the bowlers with four wicket each. Gowatham went for 80 runs in his 40 overs, while More gave 61 runs in his 21.5 overs.

In reply, Karnataka lost opener Devdutt Padikkal for a duck after he was castled by Axar. Mayank Agarwal and R Samarth then steadied the innings. Agarwal celebrated his India call-up to Australia with a fine fifty but was dismissed later by Axar. Agarwal s brisk 53 off 57 was laced with seven boundaries and one six. Axar returned to take his third wicket in Samarth, who walked back to the pavilion for 33. Shreyas Gopal added just 3 before he was bowled by Chawla.

When stumps were drawn on the final day, Siddharth KV and Dega Nischal were unbeaten on 10 and 7 respectively. 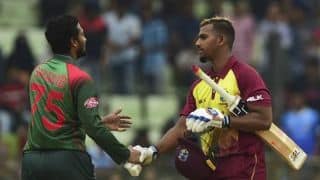