With the three points, Bengal have moved ahead of Hyderabad to fourth position with 15 points from five games.

Bengal bowled out Hyderabad for 312 to bag a crucial first-innings lead on the final day as their Round 6 Elite B match of the Ranji Trophy 2018-19 season ended in a tame draw at the Rajiv Gandhi International Stadium on Monday. With the three points, Bengal have moved ahead of Hyderabad to fourth position with 15 points from five games.

Resuming their first innings at 204/4, still adrift by 132 runs, Hyderabad lost Rohit Rayudu, who added just one to his overnight tally to depart for 93 off pacer Mukesh Kumar.

Rayudu s dismissal triggered a mid-innings collapse as Hyderabad lost the next three wickets for 60-odd runs. Kumar accounted for two of those wickets. He first had Kotari Chaitanya lbw for 22 before Chama Milind was caught by Anustup Majumdar for 13.

Ashok Dinda, who claimed three wickets on Sunday, returned to complete his four-fer with the wicket of Tanay Thyagarajan, who was dismissed lbw for 6. Kumar too complete his four-wicket haul after dismissing India bowler Mohammad Siraj for 22. Ishan Porel then wrapped the innings with the wicket of Saaketh Sairam, who departed after scoring 39 as Hyderabad folded for 312, 24 runs short.

ALSO READ: Tamil Nadu on the verge of Ranji exit after drawn match versus Punjab

In reply, Bengal were 49/1 when stumps were drawn on the final day with Abhishek Kumar Raman and Sudip Chatterjee unbeaten on 15 and 30 respectively. Abhimanyu Easwaran, who scored a fine 186 in the first dig, was the only casualty Bengal incurred after he was dismissed for 2 off Milind. 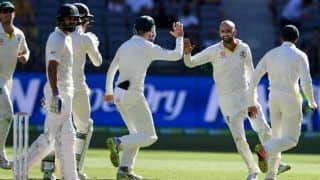 I feel there should have been a spinner: Mohammed Shami