Walking away with just one point, Baroda have slipped to fourth position with Vidarbha ahead by one point.

In desperate need of a win to keep their hopes alive of progressing to the knockouts, Mumbai had to be content with three points by virtue of gaining a first-innings lead after their Round 6 Elite A match of the Ranji Trophy 2018-19 season against Baroda ended in a tame draw on Monday.

Resuming their second dig at 20/2, ahead by 49 runs at the Wankhede Stadium, Mumbai lost their skipper Siddhesh Lad, who scored 130 in the first essay, early in the day after he edged it behind to Mitesh Patel to give left-arm pacer Lukman Meriwala his first wicket.

Shreyas Iyer, who bailed the 41-time Ranji champs out of a precarious situation in the first dig scoring a fine 178 on the morning after arriving from New Zealand, added 30 to the lead after he was dismissed by Rishi Arothe.

Still holding fort at the top – debutant Vikrant Auti – found an able ally in Shubham Ranjane as the duo steadied the innings with a 69-run partnership for the fifth wicket. However, Auti fell eight runs short of his maiden first-class fifty after he was caught by Aditya Waghmode off Vishnu Solanki.

Ranjane followed his team-mate after exposing his woodwork to Bhargav Bhatt and departed for 64 off 105, with six boundaries and two sixes.

The other debutant, Eknath Kerkar and in-form allrounder Shivam Dube then added 115 runs for the seventh wicket before Arothe returned to snap the prized wicket of Dube, who scored yet another half-century – his third of the season – to depart for 76 off 60, his blazing knock laced with three boundaries and seven sixes.

Kerkar, who registered his maiden first-class fifty, was unbeaten on 56 off 115 with six boundaries, while Akash Parkar was 8 not out as Mumbai declared their innings at 307/7 when stumps were drawn. Baroda captain Kedar Devdhar tried nine bowlers, but still failed to bowl Mumbai out. Hardik Pandya, who picked up the two wickets on Sunday, remained wicketless on Monday.

Walking away with just one point, Baroda have slipped to fourth position with Vidarbha ahead by one point. 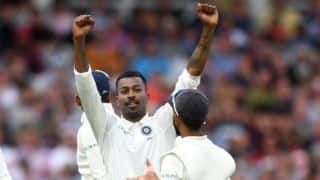