Services claimed their first win of the Ranji Trophy 2018-19 season on day four of round four beating Jammu and Kashmir by five wickets at Palam A Stadium, New Delhi on Saturday.

Chasing a target of 105 runs, Services lost five wickets with skipper Rajat Paliwal taking his team home with a unbeaten 43.

Services started the day at 67/5 and Paliwal knocked off the remaining 38 runs in just 4.5 overs. Vikas Hathwala remained unbeaten on 5*.

Earlier in the match, Jammu & Kashmir captain Parvez Rasool continued to carry his team almost single-handedly, following an eight-wicket haul with a century to become the fourth Indian cricket to achieve the milestone.

Overnight on 53, Rasool moved to his tenth first-class hundred soon after lunch on Friday while crossing 4,000 career runs. This made him the fourth Indian cricketer to take eight wickets in an innings and score a hundred in a first-class match.

Rasool shared the new ball and trapped Navneet Singh lbw first ball, and then dismissed Rahul Gahlaut for 9 in the same manner. Two wickets to Mohammed Mudhasir added to Services woes as they slipped to 66/5. Skipper Rajat Paliwal is batting on 16. 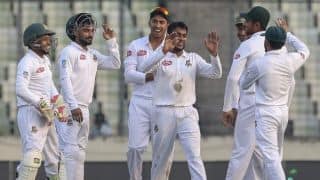