Goa were wrapped up for 244 with Chahar returning with four for 86 in his 23 overs.

Leg-spinner Rahul Chahar snapped four wickets as table-toppers Rajasthan stamped their authority over bottom-placed Goa to bowl the home side out for 244 on the opening day of their Ranji Trophy 2018-19 Round 8 Elite C match on Sunday.

Goa failed to make the most after winning the toss and opting to bat at the Goa Cricket Association Academy in Porvorim. Captain Sagun Kamat and his opening partner Sumiran Amonkar were back in the inside the first eight overs thanks to TM Ul-Haq.

Amit Verma and Amogh Desai tried to steady the innings with a 42-run partnership for the third wicket, but just as the stand was gaining steam, Nathu Singh sent Verma back to the pavilion for 32.

Desai then found an able partner in Snehal Kauthankar as the duo stitched 66 runs for the fourth wicket before Desai was trapped lbw off Chahar and departed for 44. Kauthankar had to walk back five over later after he was run out by Robin Bisht falling two runs short of his half-century.

Goa then suffered a middle order collapse. Chahar accounted for the next three wickets inside 10 overs. He first had Suyash Prabhudesai caught by Ashok Menaria for 23 and then saw the end of Samar Dubhashi (6) and Lakshay Garg (0).

Goa were wrapped up for 244 with Chahar returning with four for 86 in his 23 overs. In reply, Rajasthan were 20 for no loss with openers Amitkumar Gautam and Chetan Bist batting on identical scores of 9 when stumps were drawn. 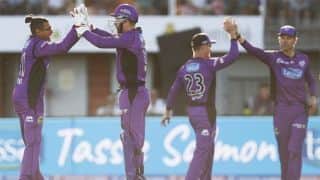