For Jharkhand, Shukla was the pick of the bowlers with three for 38 in his 20 overs.

Virtually knocked out out of the competition with 10 points from seven matches, Tripura were 247/8 on the opening day of their Ranji Trophy 2018-19 Elite C match against third-placed Jharkhand on Sunday.

Put into bat at the Keenan Stadium in Jamshedpur, the openers failed to fire. Samrat Singha fell to Ashish Kumar for 14, while Bishal Ghosh was trapped leg-before for 36.

Udiyan Bose tried to steady the innings, but fell six runs short of his half-century after he was caught by Saurabh Tiwary off Shahbaz Nadeem. Rahul Shukla then accounted for the wickets of Tripura captain Pratyush Singh (8) and then had Harmeet Singh caught behind by Ishan Kishan for four. Just as Nirupam Sen Chowdhary s was beginning to settle down, an injury cut short his innings and he had to retire hurt for 35.

Ashish then returned to break the 56-run partnership for the eighth wicket between Rana Datta and Rajib Saha. Datta, who was caught by Ishank Jaggi, departed for 21. At stumps Saha was seven runs short of his fifty, while Saurabh Das was not out on 7.

For Jharkhand, Shukla was the pick of the bowlers with three for 38 in his 20 overs. Varun Aaron went wicketless in his 10 overs going for 64 runs. 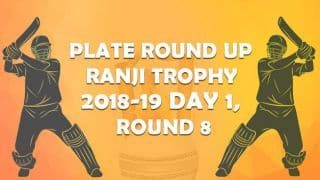