A strong rear-guard effort from Bihar saw them taking a healthy first innings over Manipur.

A strong rear-guard effort from Bihar saw them taking a healthy first innings over Manipur on the second day of their Ranji Trophy, Round 9, Plate clash at Moin-ul-Haq Stadium in Patna.

Resuming on their total of 107/5, Bihar lost both their overnight batsmen Kundan Gupta (38) and Vikash Ranjan (16) early with Manipur in sight of limiting or even securing a slim lead. But both their hopes went up in flames as captain Ashutosh Aman and Vivek Kumar built an 80-run partnership to not only put Bihar in the lead but also extend it to enough to take control of the contest again.

After Vivek was dismissed for 40, Samar Quadri further frustrated the Manipur bowlers with an enterprising innings of 32 off 22, hitting six fours in it. Aman scored 38 before being dismissed as the last batsman. Bishworjit Konthoujam and Priyojit K Singh shared 10 wickets between them, finishing with identical figures of 5/74 each.

Unlike their first dig, Manipur were off to a solid start with the openers adding 59 runs. Mayank Raghav (38) and Hrithik Kanojia both got starts but failed to convert them. Both fell to Aman in quick succession. Captain Yashpal Singh (83*) and Priyojit (64) built on the platform taking the score to 184 before beung separated. The dismissal of Priyojit saw Manipur losing their way and from 184/2, they slipped to 217/7. Ashutosh ended the day with 4/61 while Quadri had figures of 3/82. 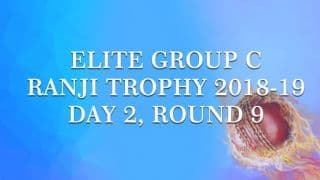