Captain Rongsen Jonathan became the third centurion of Nagaland's first innings as they were bowled out for 467 on the second day.

Captain Rongsen Jonathan became the third centurion of Nagaland‘s first innings as they were bowled out for 467 on the second day of their Ranji Trophy 2018-19, Round 9, Plate clash against Puducherry. The visitors’ reply was powered by an unbeaten century from Paras Dogra (109*) as the finished the play on Tuesday with 224/3, trailing by 243 runs.

Nagaland’s batting on second day revolved around Jonathan who resumed on his overnight score of 72. Raiphi Gomez struck early for Puducherry dismissing Imliwati Lemtur for 1.

A decent partnership followed with Jonathan and Abrar Kazi (18) adding 40 runs for the seventh wicket. Jonathan completed his third first-class century and was the last man to be dismissed after he had scored 123 off 165 with 10 fours and four sixes.

Puducherry struggled early on after losing two early wickets. Opener Thalaivan Sargunam scored 16 and departed in the ninth over, falling to Tahmeed Rahman. Captain D Rohit lasted 15 deliveries and could manage just three before Pawan Suyal had him caught. At 22/2, Paras Dogra walked in and together with Sai Karthik, began the repair work.

The duo added 176 runs for the third wicket. Imliwati Lemtur provided the breakthrough when he pinned Karthik in front. Karthik struck 10 fours in his 81 off 173.

Dogra completed his career’s 24th first-class century and at stumps was batting alongside Vikneshwaran Marimuthu (10*). 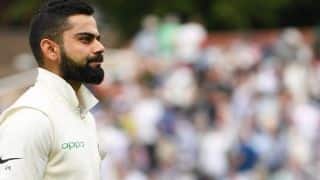