Sourav Ganguly was missing when Ravi Shastri made his presentation for India coaching job interview.

Former India team director Ravi Shastri has made it clear Sourav Ganguly, who is one of the members of the Cricket Advisory Committee  (CAC) that helped in appointing the new coach in Anil Kumble, had some issues with him. Shastri served as the team director for 18 months and oversaw an excellent run in Test cricket with victories over Sri Lanka and South Africa, as well as India’s qualification for the semi-final of the ICC T20 Cricket World Cup 2016 at home. However, the Indian cricket board appointed former captain Anil Kumble as the coach of the side for a period of one year.

Shastri, who claims that he has accepted his rejection and has moved on since then, was straight enough to declare that if there is any issue at all, it is Ganguly who should be questioned.

Ganguly was present during the presentations and interviews given by all candidates, but he was not there when Shastri’s turn came as the former had to attend two events. One of them was on the announcement of his book, in Kolkata.

Shastri, who was a red-hot favourite to take over as the full-time coach, has told the Times of India that he has moved on from the decision. He said, “My disappointment was there for a day and that is all. And it happened last week. I have moved on.” ALSO READ: Disappointed Shastri plans Thailand vacation to move on!

Shastri recalled Ganguly was not there when he made the presentation. “All I can say is that Ganguly wasn’t there when I was interviewed and you should ask what problem Ganguly has with me instead of asking me,” he said.

Famous for his straight-forwardness, Shastri said it is the BCCI’s ‘headache’ that he was not given a second chance to run the team despite having a good initial start. “My job was to prepare a team. I was able to do it with the best of ability. Right now, India are among the top two teams in world cricket in all formats,” he said. ALSO READ: Shastri says Ganguly was not present during his interview

Talking about his stint with the Indian team, Shastri recalled, “I had a dream run with the team for 18 months. In the next three years, we are in the process of achieving more. I am also happy that the talented team was able to achieve quite a lot of things during my tenure. Starting from becoming the No. 1 Test team in the world to doing well in ODIs and T20s in England and Australia, we played good cricket.”

“We need to be consistent with bowling a bit and with Anil Kumble at the helm, I am sure our bowling will improve in the days to come. As far as I am concerned, it was indeed a memorable journey. I don’t have any regrets,” he added.

Giving details on his presentation to the committee consisting Sachin Tendulkar, Sanjay Jagdale and VVS Laxman, Shastri said, “First of all, I wasn’t giving any interview for the job of a CEO. I had very good discussion with Sachin Tendulkar, Sanjay Jagdale and VVS Laxman about the future of Indian cricket. We also spoke about the good things that happened during my tenure as the team director.”

“I think that our overseas performances were good. Most importantly, the boys responded well and they are hungry for success. We are not No. 1 in Test cricket today only because we haven’t played the format for last six months,” he added.

Back from a vacation, Shastri said he wants to take a break from cricket from sometime, adding that he will be traveling to the Caribbean in sometime but for Sir Gary Sobers’ 80th birthday celebrations.

Is everything fine between Sourav Ganguly and Ravi Shastri? 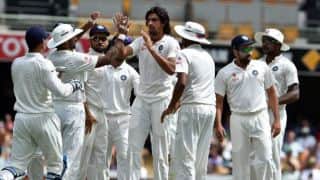