Director Ravi Shastri said he might just be there "longer" than expected before leaving for India tour of Bangladesh 2015.

Kolkata: Asserting that the Indian cricket team does not require “more coaches” than what it already has right now, Director Ravi Shastri today said he might just be there “longer” than expected. Shastri was retained as Director of the team for the tour of Bangladesh, which starts with a one-off Test on June 10 and also features three ODIs after it. Read: Ravi Shastri appointed Indian cricket team’s interim coach

Addressing a pre-departure press conference here, Shastri said the team is not exactly hard-pressed for a chief coach right now. “We have got three coaches, we don’t need another coach. I will double up as head coach if need be, so there is no issue whatsoever,” said Shastri when asked whether the side would miss having a national coach after Duncan Fletcher‘s tenure came to an end earlier this year. Speculation, perception, that is your problem, not my problem. As far as coach is concerned, we don’t need one,” he insisted. Read:Ravi Shastri likely to get extended run as Indian cricket team director

Quizzed further on how long he will continue with the team, Shastri said, “When we come back from Bangladesh, I will sit with them (the BCCI) and decide. I don’t rule out anything. I might be there much longer than what you think.” Asked whether the team is confident of a good show against the lower-ranked Bangladesh, Shastri said, “We respect every opponent and Bangladesh is another opponent.” Ravi Shastri to discuss his tenure with BCCI after India tour of Bangladesh 2015

A talking point ahead of the tour has been the Test comeback of veteran off-spinner Harbhajan Singh and asked whether he would be leading the Indian attack, Shastri said it would be a combined effort. “We welcome Harbhajan back in the side, he is a good operator and will bring plenty to the plate. (But) it’s going to be an India bowling outfit, not anyone in particular leading the pack,” he said. Read: Harbhajan Singh attracts eyeballs as India begin practice for Bangladesh tour in Kolkata

On to other developments in Indian cricket, Shastri welcomed the appointment of batting great Rahul Dravid as the new India A and Under-19 coach. “I have already had a chat with Dravid. There is no better news for Indian cricket … There cannot be a better man for that job. He will be with the youngsters and that will help the senior team,” he said. Read: Rahul Dravid appointed India A and India Under-19 coach 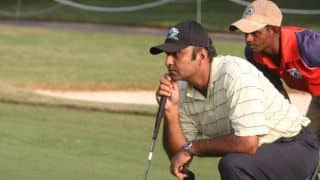 Charu Sharma hopes for international cricket to return to Kashmir

Rahul Dravid appointed as India A and India Under-19 coach: Twitter reactions