R Ashwin, who will play his 50th Test at Galle, spoke about his memories of the 2015 tour where he took a 10-wicket haul in the first Test, which was also played at the same venue.

Ravichandran Ashwin will be playing his 50th Test when India begin their campaign against Sri Lanka in Galle. On the special occasion, Ashwin spoke about his memories of the 2015 tour where he took a 10-wicket haul in the first Test, which was also played at Galle. Here s what he said: We did really well, I mean I did really well. It was a momentous occasion for me, as I was making a comeback in the Indian Test team. I got a 6-for on the first day and then went on to get a 10-for on the third day. It brings a lot of good memories coming back to the same venue. The 50th Test is something that has come about and I m really grateful to have got a chance to be here. Every Test is a blessing from here on.

Speaking about his batting, Ashwin said that he has achieved reasonably well with the bat, but would like to improve his average. I have achieved reasonably well with the bat. I set high benchmarks for myself with the bat and right now, I m pretty low on the (batting) average as I would like it to be. I started at around 42-43 and currently, it s somewhere around 33 [32.25]. I think the tennis elbow issue really affected my batting at the Test level, but the graph is definitely back up there. Last series against Australia, I had some innocuous dismissals, so I ll try to put it behind me and get better with the batting again.

When asked about his opinion on Ravi Shastri becoming the new head coach, Ashwin is very positive about the influence Shastri can have on the team. Ravi-bhai (Ravi Shastri) has been really a fabulous person to have in the dressing-room. Even the last time when he was here, when we lost the Test, he really picked us up from the low-point in our careers. He is someone who can have positive influence on the dressing room and the team is looking up to working with him and producing some amazing results.

Ashwin also mentioned about the infamous Anil Kumble-Virat Kohli fiasco and commented, “We are well past that moment (when the difference of opinion emerged between captain Kohli and former coach Kumble). The decision has been made and it is definitely something that I cannot really comment on.”

Ashwin mentioned that picking up the wickets of Kumar Sangakkara, AB de Villiers, Shaun Marsh, David Warner, were some of the best dismissals he has had in his career. I think getting Sangakkara in the second Test at P Sara Oval in Colombo, AB de Villiers in Nagpur although it was quite a helpful wicket, the set-up was very good; then Shaun Marsh in the second innings at Sydney and David Warner at Bangalore. There have quite a few good balls that I have bowled and I think I have done reasonably well as a cricketer.

Ashwin is just 25 wickets away from picking up 300 wickets in Tests, and the way he is bowling, it ll be no harm to say that he will reach the landmark by the end of the series. 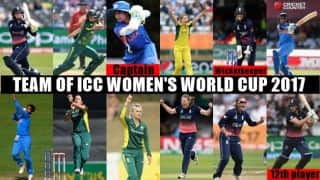