This match is of no consequence as both the teams are at the bottom of the points table of IPL 2016 and have been already eliminated.

Ravichandran Ashwin’s four-for restricted Kings XI Punjab 172 for 7 in 20 overs in Match 53 of Indian Premier League (IPL) 2016 at Visakapatnam on Saturday. Half centuries from Gurkeerat Singh and Murali Vijay ensured Punjab posted a competitive total on board. Kyle Abbott and Rishi Dhawan werw unbeaten on 1 and 11 respectively. A total of four Punjab batsmen were dismissed for single digits and barring these two it was only Hashim Amla who was decent with the bat. The other wickets were shared between Ashok Dinda, Thisera Perera and Adam Zampa as all three bagged one wicket each. This match is of no consequence as both the teams are at the bottom of the points table of IPL 2016 and have been already eliminated. Live Cricket Scorecard: Rising Pune Supergiants  vs  Kings XI Punjab , Live Score, 53rd T20 Match, IPL 2016

Amla got off the mark with a boundary off Irfan Pathan’s bowling in the very first over of the day towards the midwicket boundary. He went on to replicate the superb timing two balls later when he scored his second boundary of the over. Pathan went short and Amla punished him towards the fine leg to end the first over. Amla, who joined KXIP as Shaun Marsh’s replacement has been successful in giving his side the required starts. Although he was dismissed for 27-ball 30 on Saturday, he set the tone of KXIP’s innings.

Amla was instrumental, had begun to target the spinners, in the last few balls before getting out. The South African smashed a six and a boundary before Ravi Ashwin removed him in the eighth over. In an attempt to pull a short ball from Ashwin, targeting another boundary, Amla was caught by former KXIP skipper George Bailey at midwicket. If the visitors fall short of runs towards the end, this dismissal can easily be the turning point of the match. Amla and Vijay looked dangerous as they put on a 60-run stand for the opening partnership.

Australian leg-spinner Adam Zampa has been easily the stand out bowler for RPS, claiming 12 scalps having played only four matches. Zampa was impressive yet again, made a breakthrough in his very first over of the day. Wriddhiman Saha was the new batsman following Amla’s wicket. The wicketkeeper-batsman faced three balls before throwing away his wicket in the ninth over. Zampa went outside off, a confused Saha while trying to go past the short third man was caught by Ashwin, who finished a smart catch at first slip.

After failing in six consecutive appearances for Punjab in this ninth edition of the IPL, Gurkeerat finally brought up a fifty. Gurkeerat opened his account of boundaries after facing three deliveries when he hit Ashwin beating the short third man fielder. It was another short ball from the spinner that got punished. The batsman made room and very conveniently finished the boundary.  Gurkeerat targeted Ashwin again in the 17th over when he smashed the fast bowler for two sixes in the same over.

Gurkeerat went forward, made good use of his front foot and cleared the boundary over long on. A delivery later, he chose extra-cover for a second maximum. He went after Ashwin in the 18th over as he welcomed him with a six and a four in the first two deliveries of the over before getting dismissed. After the dismissals of the openers, Gurkeerat’s innings was the only time that entertained the crowd.

The likes of David Miller, Akshar Patel and Farhan Behardien walked back to the dugout in quick succession. Earlier, Punjab skipper Vijay won the toss and had opted to bat. While RPS went unchanged, Punjab made one change with bringing in Rishi Dhawan for KC Cariappa. 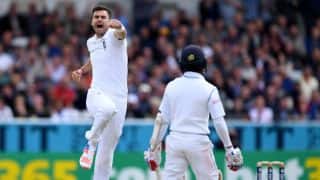