Indian batsman, Ravindra Jadeja joined skipper, MS Dhoni on the middle following the soft dismissal of Suresh Raina, against former two-time world champions, West Indies in their Pool B encounter, match 28 of the ICC Cricket World Cup 2015 at the WACA ground in Perth on Friday. Currently, India are 122 for the loss of five wickets in 27 overs with MS Dhoni on 13 and Ravindra Jadeja on six. Live Updates: India vs West Indies 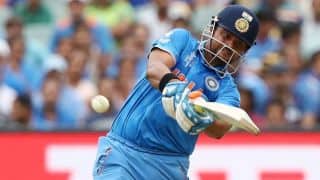 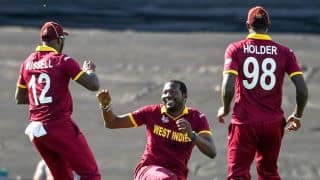