South Africa will still have a lot to do when the play resumes on Day Three.

South Africa have been bowled out for 121 in the fourth Test against India at Delhi. South Africa still trail India by 213 runs. Ravindra Jadeja was the most successful bowler as he finished with figures of 5 for 30. Umesh Yadav, Ishant Sharma and Ravichandran Ashwin too chipped in with crucial wickets to put India in command at the end of the day. India were bowled out for 334 in their first innings after resuming the day on 231 for 7. Ajinkya Rahane scored an excellent ton and Ashwin gave him good company and scored 56 himself. The duo pot on 98 for the eighth wicket to help India’s cause. Full Cricket Scorecard: India vs South Africa 2015, 4th Test at Delhi

AB de Villiers was the only batsman, who looked in good touch in this innings, but he fell right at the end of day’s play. Dean Elgar was the first man to be dismissed for 17, caught behind off Yadav. Wickets started falling in a flurry after that. Jadeja bowled his first over of the match after tea and wrecked havoc. He first got rid of Temba Bavuma for 22. He was looking good in his 55-ball innings in which he scored 22. Skipper Hashim Amla soon followed suit  for a painful 33-ball 3 and then Faf du Plessis went for a duck after he attempted a poor shot. JP Duminy was cleaned up by Yadav with a peach of a delivery. Duminy therefore became Umesh’s 50th scalp in Tests. Full cricket updates: India vs South Africa 2015, 4th Test, Day 2 at Delhi

Dane Vilas was the next to go after he was bowled by Ishant. He neither went forward or back and as a result his bat came down a bit late and the ball crashed into the wickets. Abbott was the next batsman dismissed. He was trapped LBW off the bowling of Ashwin, which is his only wicket of the match so far. Jadeja then struck just before stumps to get rid of Piedt.

On Day One, India had won the toss and elected to bat first. India have made a change to their side as Mishra misses out and Umesh has been included in his place. South Africa too have made a few changes. They have roped in Piedt, Abbott and Bavuma in place of Kagiso Rabada, Simon Harmer and Van Zyl. 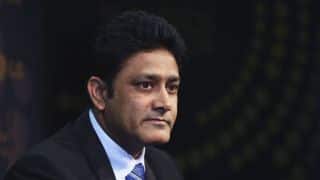