The West Indies Cricket Board is set to honour Richie Richardson and Peter Nero for their contribution to the game.

Port of Spain: The West Indies Cricket Board (WICB) will recognise the outstanding contributions of Richie Richardson and Peter Nero and honour them at the conclusion of the NAGICO Super50 Tournament. Nero will be presented with a special momento at the end of the final match at the Queen’s Park Oval, a WICB release said on Saturday. Richardson, a former West Indies captain, is one of the leading batsmen in the team’s history. A dominant stroke-maker, he made 5,949 runs at an average of 44.39 runs per innings in Test cricket. He hit 16 centuries, with a best score of 194 against Australia at Bourda, Guyana. He scored 6,248 runs in One-Days, at an average of 33.421 including five centuries. ALSO READ:  Shivnarine Chanderpaul announces retirement from international cricket

The 54-year-old was team manager from 2011 to this month, before taking up a role as International Cricket Council (ICC) Match Referee. He is being honoured for his contribution as a player and an administrator. Nero, has been one of the leading umpires in regional cricket for over a decade. The 51-year-old has stood in 34 international matches. His first outing was April 21, 2011 at Beausejour when the West Indies played Pakistan in a T20 International. WICB president, Whycliffe ‘Dave’ Cameron, showered praise on Richardson and Nero for their excellent work and contribution to the game in the West Indies. ALSO READ: Sachin Tendulkar comments on Shivnarine Chanderpaul’s international retirement, congratulating him

“Peter has been an outstanding umpire in our cricket and we want to show our appreciation for his dedicated service. He is well-organised and very professional and is a standard-bearer for match official in the region. He is an insightful individual who commands the respect of players on and off the field. He has maintained a rich tradition of quality umpires in the Caribbean and we hope to see the continued development of our officials.” 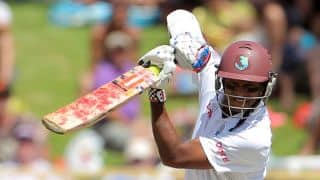