Uttar Pradesh batsman Rinku Singh has been suspended by the BCCI for three months for participating in an unauthorised T20 tournament in Abu Dhabi.

Uttar Pradesh batsman Rinku Singh has been suspended by the BCCI for three months for participating in an unauthorised T20 tournament in Abu Dhabi.

Rinku, who represents Kolkata Knight Riders in Indian Premier League, turned out for Deccan Gladiators in the Abu Dhabi Cricket’s Ramadan T20 Cup. He was their star performer, hitting 104 runs and taking two wickets in the final to lead his team to title victory.

The punishment is on expected lines as BCCI has a no-tolerance policy on its cricketers taking part in tournament without seeking its permission.

“Mr. Singh did not seek permission from the BCCI before taking part in the T20 league hence directly violating the BCCI rules and regulations,” BCCI said in a media release on Friday.

“As per the BCCI norms, a player registered with the Board cannot play in any tournaments abroad without the Board s permission. Mr. Rinku Singh therefore has been suspended with immediate effect for a period of three months starting June 1, 2019,” it read.

Rinku has also been removed from an India A squad which was to face Sri Lanka A in a multi-day match beginning May 31.

The release further added, “The BCCI will not tolerate such violations in the future and strict actions will be taken if a player is found violating the BCCI rules and regulations.” 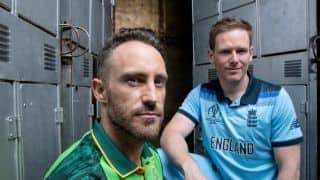 Cricket World Cup 2019: Car mechanic and a super fan: How Shoyab Ali made it to England to support Bangladesh