India A batsmen’s vulnerability against the red ball in foreign conditions was exposed as England Lions handed the visitors a 254-run defeat in the one-off Unofficial Test on day four here today. India A, who were reeling at 11 for three at stumps on day three while chasing an improbable 421-run target, did not put up much of a fight even in the second innings, folding up for 167 in 44 overs. They had struggled to 197 all out in 66.5 overs in the first essay after Lions made 423.

The sole silver lining for India A was that Ajinkya Rahane and rookie Rishabh Pant got to spend some valuable time in the middle ahead of the five-Test series against England, beginning in Birmingham on August 1. Pant, who has earned his maiden Test call-up, struck a second successive half-century century to give the Indian team management a selection headache ahead of the first match. India have picked two specialist wicket-keepers in the 18-man squad, including Pant and Dinesh Karthik, who is more likely to feature in the series opener.

The A game served as warm-up game for the likes of India vice-captain Rahane, opener Murali Vijay, Karun Nair and Pant, who are all part of the Test squad announced yesterday. Pant made a mark against a potent pace attack comprising four Test players, with a 58 and 61, while Rahane too got to spend some time at the crease, having scored 49 and 48 in the two innings. Nair and Vijay, however, failed in both the innings.

Only a miracle could have saved India A, but that did not happen, as the batting let the team down for the second time in the match. The writing was on the wall when India A reached 115 for six at lunch. The innings did not last long following the break and the moment Pant perished after a quickfire knock, it was all over for India A.

Another take away for India A from this match was the bowling performance of Mohammed Siraj, the young pacer from Hyderabad. He impressed in the second inning too with figures of 3/55 after snaring 4/79 in the first innings. What was impressive was that this time he accounted for the top 3 in the batting order including the prized wicket of Alastair Cook. Siraj also impressed in the second unofficial Test against West Indies A at Taunton, he played an important role in his side’s victory with a match haul of 8/132. So, in effect, Siraj took 15 wickets at 17.73 in the two unofficial tests he played in England.

India A would look to improve in the areas in which they were found wanting in this game against the England Lions. 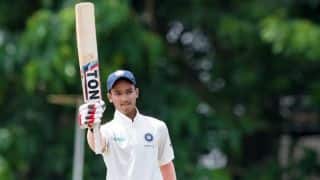 India U19 vs Sri Lanka U19, 1st Youth Test, Day 3: India Colts in position of strength going in to the final day