After a slow start, RPS have found their way to the top four with timely victories, while the runners-up of the previous season of IPL, RCB have looked out of sorts.

It is match No. 34 of Indian Premier League (IPL) 2017 and a chance for Rising Pune Supergiant (RPS) to post a crucial victory over the struggling Royal Challengers Bangalore (RCB). After a slow start, RPS have found their way to the top four with timely victories, while the runners-up of the previous season of IPL, RCB have looked out of sorts. RCB need victories in all the remaining games to make it to the IPL 10 play-offs while another victory for RPS will push them a step forward towards their goal. The contest which will be be played at the Maharashtra Cricket Association Stadium, Pune, will thus be of great importance for the hosts.

Though RPS lost their last game to Kolkata Knight Riders (KKR), three consecutive victories prior to that have put them in a positive form where the team can bounce back into winning terms once again. Playing at home ground and in favourable conditions, Imran Tahir will be one of the most crucial men of the RPS army to look forward to in the Saturday fixture. Steven Smith has enjoyed run-making at this venue ever since he arrived in India in February, and with the scores of 109 (against India in the first Test), 84*, 27 and 51* in the ongoing IPL, he looks in ominous form.

The star-studded batting of RPS has chipped in to make competitive scores from time to time, unlike that of RCB, who have failed to get their act together as a team. Ajinkya Rahane and Rahul Tripathi will be expected to take the team off to the perfect start yet again while the likes of MS Dhoni, Manoj Tiwary and Dan Christian will be expected to provide crucial runs at the end.

RCB s performance in the current season has blatantly exposed the team s dependency on individuals. Virat Kohli, the driving force of the team, is yet to deliver his best. Kohli missed out on the previous few games for the team while team s mainstay KL Rahul s absence was another blow to the side for the initial lag, from which they never recovered.

The contributions from the other big guns such as Chris Gayle and AB de Villiers have been far too inconsistent, and the Indian contingent has failed to match the exploits of their peers in the other sides. Mandeep Singh took to Twitter recently and in a series of tweets he admitted struggles for form, whereas the likes of Stuart Binny have not been able to chip in with either the bat or the ball.

However, Royal Challengers Bangalore will want to win the remaining battles for pride, as their chance to make it to the final four look very bleak. RCB would not have expected such an ordinary show in IPL 2017 especially after getting close to winning their first-ever tournament, and the ultimate goal looks to be as elusive as ever for a captain who is yet to lost any series while playing for his national side.

Samuel Badree has been a game-changer and will be interesting to look forward to for RCB, but the bowling has been found wanting for more than one occasion. Interestingly, RCB have generally struggled with bowlers but this time around, it s the batsmen who have let them down.

Kohli likes to lead from the front and it will be no surprise if he turns up all guns blazing in the remaining games. For a batsman who ended his drought of centuries in T20 format with as many as four tons in the last edition, big runs will be expected.

Story so far: RPS have won four of their eight matches so far and are at the fourth position in IPL 2017 points table. RCB are at seventh position with two victories from nine matches.

Advantage: Be it confidence or be it playing conditions, RPS are ahead of RCB in the battle. 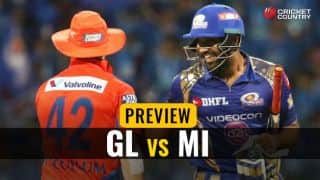