India have beaten Australia by 57 runs in the seventh One-Day International (ODI) at the M Chinnaswamy Stadium, Bangalore. With this victory they have clinched the seven match series 3-2, with two games washed out due to rain. Rohit Sharma’s scintillating 209 off 158 balls powered India to a mammoth 383 for six in their 50 overs. In reply, Australia stuttered, but then recovered thanks to some great hitting by Glenn Maxwell and James Faulkner. However, that wasn't enough as they finished on 326 in 45.1 overs. 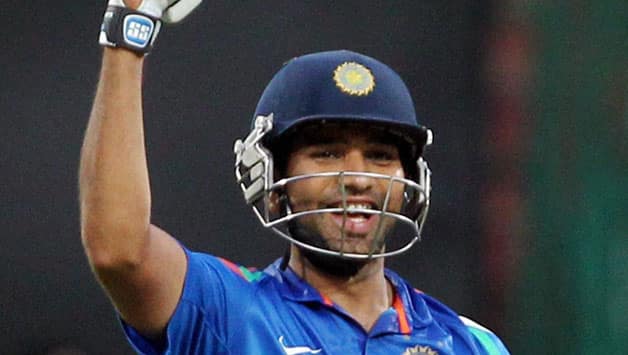 Rohit Sharma’s 209 off 158 balls was a scintillating display. His onslaught ensured India won the game and the series © PTI

India beat Australia by 57 runs in the seventh One-Day International (ODI) at the M Chinnaswamy Stadium, Bangalore. With this victory they have clinched the seven-match series 3-2, with two games washed out due to rain. Rohit Sharma’s scintillating 209 off 158 balls powered India to a mammoth 383 for six in their 50 overs. In reply, Australia stuttered, but then recovered thanks to some great hitting by Glenn Maxwell and James Faulkner. However, that wasn’t enough as they finished on 326 in 45.1 overs.

It was a good day for batsmen in Bangalore. Firstly, Rohit smashing 16 sixes, which is a world record. Later, Maxwell came in and raced to fifty in only 18 balls, equaling Simon O’Donnell’s record for the fastest half-century by an Australian in ODIs. Soon after, Faulkner notched the fastest ton by an Australian in ODIs by getting there in 57 balls. The match saw a record of 38 sixes in the game, most for any ODI.

George Bailey won the toss and elected to bowl first. Australia brought in Nathan Coulter-Nile in place of Mitchell Johnson, who had headed home to prepare for the Ashes. India on the other hand recalled R Vinay Kumar and dropped Amit Mishra.

India got off to a good start courtesy Shikhar Dhawan, but Rohit was more sedate early on. Dhawan raced to his fifty and punished the bowlers if they got it wrong. However, he was leg-before for 60 by Xavier Doherty, who picked up his first wicket of the series.

Disaster struck for India as Virat Kohli was run-out for nought after a mix-up with Rohit. India’s scoring rate picked up when Rohit smashed a few sixes in the middle off the spinners Maxwell and Doherty. However, the fall of a few wickets slowed India down and then skipper Mahendra Singh Dhoni joined Rohit in the centre.

Rohit got to his century in 114 balls and then entered a different zone thereafter. Anything on his pads was nonchalantly dispatched over square and fine-leg for six. He was dropped by Moises Henriques when he was on 120 as the ball went through his hands at the square-leg boundary and sailed over the ropes.

With Rohit’s amazing show at one end, it was easy to forget Dhoni at the other. The Indian captain also raced to fifty off only 34 balls. He essayed the trademark helicopter shot which went over the roof at the Chinnaswamy Stadium.

Rohit kept smashing sixes and neared the double ton before the last over. The first ball of the 50th was smashed over the off-side for a six as he completed only the third double ton in ODI history. He joined the likes of Sachin Tendulkar and Virender Sehwag in the league of batsmen to have scored double hundreds in ODIs. And, he didn’t stop there as he hit another six before holing out to square-leg. Dhoni finished the innings with a few boundaries before being run-out off the last delivery.

However, Maxwell walked in at 74 for four and smashed the ball all over. He was sweeping the spinners and was fearlessly carting the pacemen. In the end, he got to his fifty off 18 before being dismissed for 60 off 22 balls.

Watson walked in and had a few words with the Indian fielders. That only motivated him to smash the ball as he easily hit through the line and smashed six sixes. However, he was out for 49 in bizarre fashion as shaped to cut Jadeja, but only hit it onto his pads and the ball ballooned to point.

James Faulkner also enjoyed the good batting surface and got to his fifty in 35 balls. In his ninth wicket stand with Clint McKay, the latter did not open his account unitl the 58th run was scored.

Faulkner then simply took his chances and finished his ton off 57 balls, breaking Matthew Hayden’s record of scoring it in 66 deliveries. McKay and Faulkner recorded a partnership of 115 and gave India a scare as the latter was smashing the ball. However, Ravindra Jadeja broke through McKay’s defence in the 45th over and then Faulkner holed out to the deep handing India the victory.

Australia would have wondered what might have been had they had wickets in hand. Rohit walked away with the Man of the Match and Series awards.

Man of the Series: Rohit Sharma.

Complete coverage of Rohit Sharma’s 209 against Australia at Bangalore

India vs Australia 7th ODI at Bangalore: Jadeja gets McKay; Australia 326/9 in 45 overs