When MS Dhoni was rested during the India tour of Zimbabwe, Virat Kohli was made the captain of the team. However, days later Kohli said Mumbai Indians batsman Rohit Sharma is an ideal captain material. After returning from India A tour of South Africa, Rohit said it was very kind of Kohli to praise him. 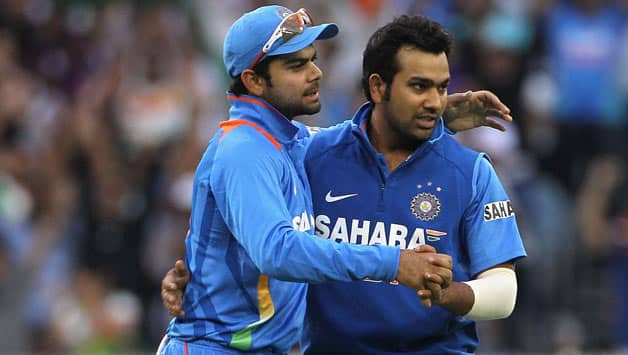 When MS Dhoni was rested during the India tour of Zimbabwe, Virat Kohli was made the captain of the team. However, days later Kohli said Mumbai Indians batsman Rohit Sharma is an ideal captain material. After returning from India A tour of South Africa, Rohit said it was very kind of Kohli to praise him.

“That’s very kind of him. I was in South Africa when he said it. When I came back, people told me about it. We know each other very well, we know what works for both of us. Maybe he must have liked what I did with Mumbai. But it was very nice of him,” Rohit was quoted as saying by Times of India.

With new rules in place by the International Cricket Council (ICC), Rohit feels that it is not so easy. However, he is happy that India has managed to adjust to the condition.

“Facing two new balls is not easy. The new rules have had an impact and we’re happy as a team we could manage to do well and adjust to them. As far as opening is concerned, it is about how mentally strong you are, what kind of pressure can you manage take and deliver,” he said.

“The two new balls rule has certainly made life better for the bowlers in one-day cricket. It’s a breather for them. With one new ball, on flat wickets, it was very difficult for the pacer bowlers. On the other hand, it tests the batsmen a lot,” Rohit said.

“Batsmen need to be technically sound to counter it, gauge conditions well. There’s been a huge difference in the approach. With five fielders inside the circle, it can get very tricky. If you’ve just come in to bat, easy singles aren’t so easy any more.

“It’s the opposite if the batsman is set. The pressure is on the bowling side because there’s a fielder less in the deep. There are positives and negatives, but challenging nonetheless.”

“I’d personally like to believe that as long as the team is winning, the contributions are in place and players are taking care of the responsibility assigned to them, it’s fine. Probably, the next step is to be the match-winner and be consistent at it. It will happen with time. It’s a learning process forever.

“There’s so much competition, you cannot afford to think like that. If you look at my First-Class statistics, I have 16 hundreds and 22 fifties which means I hold an appetite for longer innings. I have three double-hundreds and a triple. I like to bat longer.

“Recently, on the ‘A’ tour of South Africa, I played 250 balls to get my hundred in the first Test. It has not been my nature to play that kind of an innings. But eventually I was glad I did it. it was very satisfying. It is something I will keep working on.”

Rohit also said that he loves Twenty20 cricket because he believes it brings the best out of him.

“Firstly I love the format. It suits me very well. It’s not like one-dayers or Tests don’t but whether it was Deccan Chargers earlier or now Mumbai Indians now, there was always a certain responsibility I’ve felt and it has always brought the best out of me,” said Rohit. “In MI’s case, last season, they gave me the captaincy and I relished the opportunity.”

Speaking about setting goals for himself, Rohit said, “To say that I do may sound very cool in an interview but in real life it doesn’t work like that. You take it day by day, match by match, season by season. The goal has to work hard and give your best.”

“You can’t set targets like I have to score two hundreds, three fifties… It’s a very abstract term. The goal has to be about keep thinking of ways to contribute to the team at all times. Sport is so much about being instantaneous.”

“What suits us (Team India) best is the reverse swing, especially when playing on the sub-continent wicket. That is our strength. Likewise, spinners are also our strength. They can get quickly into the game and start turning the ball. But with two new balls, strategies have had to be drawn again. Reverse swing is a factor that has completely gone missing,” he concluded.