It will be tough for selectors to choose from Cheteshwar Pujara and Rohit Sharma as Pujara scored a century in Duleep Trophy final.

Mumbai: The below-par Test record of Rohit Sharma is expected to be the focus of discussion when the selection committee, headed by Sandeep Patil, picks the Indian cricket squad for the home Test series against New Zealand, here tomorrow. Despite Rohit’s poor form in the Tests, he has the confidence of captain Virat Kohli, who feels that the ODI specialist should be given a longer run to prove himself in the Test format. The star Mumbai batsman, who holds the world record for the highest score in ODIs, could never settle down in the longest format during his delayed 18-Test career that began with a bang — with back-to-back tons against the West Indies in 2013 in India. ALSO READ: Rohit Sharma, Shikhar Dhawan to play in Duleep Trophy final

Considered to be a batsman with a wide range of strokes, Rohit has been in and out of the playing XI since then with consistency not his forte in Tests. In the recent series against the West Indies in the Caribbean, he got a chance to play in two out of four games, one of which was washed out, and he mustered 9 and 41 in the two innings in the third Test at Gros Islet. How much patience will the selectors continue to have on the talented but under-performing 29-year-old batsman at the Test level is a matter of conjecture. ALSO READ: Rohit Sharma: Team India moving ahead in right direction ahead of long season

Rohit also did not do well in the first innings of the ongoing Duleep Trophy final in Greater Noida after being specifically included in one of the teams — India Blue — following his return from the West Indies and the USA. He made just 30 runs on Saturday before throwing his wicket away. With quite a few talented youngsters like Shreyas Iyer, Manish Pandey and Karun Nair waiting in the wings, the selectors will have a tough task at hands.

Another top-order batsman who has come under the scanner is Cheteshwar Pujara. He was dropped for the final Test against the West Indies, along with successful opener in past Test rubbers — Murali Vijay –, by the tour management.
Pujara grafted his way to 62 runs from two innings, but has since then answered the selectors’ queries with back-to-back hundreds in the Duleep Trophy and is likely to be included in the squad which, more or less, should be the same that toured the West Indies and won the series 2-0. 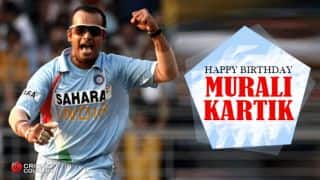