The foreword makes this a truly incredible volume. It is by none other than AB de Villiers.

In the biggest public library of football-crazy, largely cricket-agnostic Netherlands, Arunabha Sengupta stumbles upon an extraordinary volume on cricket, with an AB de Villiers connection.

The joys of the bibliophile are often sprinkled with unexpected delight, serendipitous surprises, and the inexplicable joy of caressing a physical volume that very few know of.

And that discovery can happen anywhere, even one is not hunting down obscure works of literature with painstaking rigour. They can suddenly pop out of nowhere, as unexpected reward of a life spent in tracking down treasures.

For example, in Openbare Bibliotheek Amsterdam, the eight-storey public library situated in the centre of Amsterdam, one does not go looking for cricket books. After all, England is just a short hop away for all cricket-literature related discoveries. And the excursions of that nature that this writer has undertaken has filled up several such pieces, and will probably stretch to a couple of books in their own right.

Yet, life can be rewarding and most generous when one is least expecting it.

So, searching for some football chronicles in the sports section of the library, one can find himself stumbling upon a curiously small red-coloured volume named Rood leer op wilgenhout.

A frantic mental translation into English whets the appetite. It means, red leather on willow wood . The implications are mouth-watering for any cricket adherent.

But, is it possible?

It turns out that improbable though it sounds, there is such a volume on cricket. The strange, obscure, unconventional game, as many Dutchmen put it, Played by grown men in tight white sportswear a sport that is played by an extremely small group of enthusiasts in the summer in Netherlands, mostly expats from India and Pakistan, and in September must make room for the hordes of hockey and football teams who demand the fields. That strange sport has made its way into a book in Dutch in modern times.

Yes, the phrase in modern times is important in this context. Because I myself am in the possession of another incredible volume in Dutch, named Cricket, published in 1897, written and illustrated with meticulous detail incorporating technical instructions, quaint early photographs and even seasonal statistics, by a Dutchman called W Mulier.

But, then cricket did have a rich past in the land, something not many Netherlanders are aware of. The Mulier volume deserves a separate and much longer article.

However, a volume on cricket published in Dutch in the modern times is indeed extraordinary.

Rood leer op wilgenhout is the work of former Dutch cricketer Jacob Jan Esmeijer and writer Harry Oltheten, with beautiful black-and-white images by the talented young cricket-loving photographer Nathalie Hennis. Published in Deventer in 2014, it consists of eleven insights into the strange world of cricket, the experiences of eleven rather famous Dutchmen.

These Dutchmen are not famous as cricketers. They made it big in other walks of life, and somehow managed to get a taste of the game and became enamoured.

Through 11 interviews, Esmeijer and Oltheten have captured the experiences of those 11 celebrities and the role cricket played in their lives.

For example there is Erik van Muiswinkel, the podium artist, actor, singer and television presenter, famous for his programs Ookdatnog!, Kopspijkers and Studio Spaan. In this volume he speaks about Garry Sobers, of cricket in Toronto, of playing against the London Gentlemen in 1986, of how his cricket-mentor taught him the principle of pushing the rules to the limit without getting caught, using whatever dubious methods possible to achieve the desired end .

There is the pianist Mikke Bodde, former cabaretier and voice imitator. He speaks of how his family was totally cricket mad. There is also a superb photograph of his, courtesy the charming Hennis, that shows him playing the piano while wearing cricket gloves.

There are similar snippets from the poet Arjen Duinker, who recounts the famed Michael Holding over to Geoff Boycott at Barbados in 1981, and contrasts between Merv Hughes and Richie Benaud. He even produces a poem about the game, where, amongst others, there is a mention of how Tendulkar, Azharuddin and the rest of them overhaul a steep target set by Jacques Kallis and the other South Africans.

The writer Bert Chabot is there, as are politician and scholar Bas de Gaay Fortman (who recounts his experiences with Wes Hall), sports journalist and columnist Henk Spaan, the judiciary president and author Maarten Asscher (depicted in suit, standing in batting posture next to a passing Amsterdam tram), reporter and editor Paul van der Bosch, actor Maarten Wansink (who reminisces about Imran Khan), NRC correspondent Rob Boddaert (who recounts travelling to Lord s by car and watching the famed 1963 Test between England and West Indies) and finally the expat Australian and Vice-Chairman of the Netherlands Cricket Board, Rod Lyall.

There are two forewords. One is by Jort Kelder, the Dutch journalist, television presenter and past chief editor of the monthly magazine Quote.

And the other foreword makes this a truly incredible volume.

It is by none other than AB de Villiers, and is written in Afrikaans. Yes, Afrikaans is the language of the Dutch settlers in South Africa, and is almost equivalent to Dutch as it was spoken three or four centuries ago.

And de Villiers says, The most enjoyable bit of international cricket is the fact that you can see the best countries of the world and come in contact with the culture and people in those countries.

Well, for the cricket-book enthusiast one of the most enjoyable experiences is to come across these sorts of hidden gems when least expecting it. 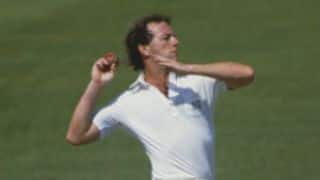