Burns, with 1319 runs so far, has lead Surrey to Division One title and is also leading the run charts. He is most likely to succeed England s Alastair Cook at the top of the order.

After being repeatedly ignored for national selection despite scoring heavily the County Circuit – 1000 plus runs in the last five seasons – Surrey s Rory Burns finally got his maiden Test call-up for the Sri Lanka tour starting October 5.

Burns, with 1319 runs so far, has lead Surrey to Division One title and is also leading the run charts. He is most likely to succeed England s Alastair Cook at the top of the order.

I think Rory Burns really deserves his chance in the Test squad, said Smith after announcing the 16-member squad for the SL series.

He has impressed everyone with the consistency of his run scoring, not just this year when he s scored 1,300 runs and led Surrey to the title which are both significant achievements but over five years, when he has consistently scored over a thousand runs (per season), said Smith.

Alongside Burns, 32-year-old Joe Denly has been picked as the third opener and the Kent batsman has had a career resurgence of sorts, after playing nine ODIs and five T20Is for England in 2009-10. He has scored 798 runs so far in the Divison Two in 13 matches helping Kent gain promotion to Division One.

But it is the versatility that Denly brings to the table that has prompted the two-man selection committee of Ed Smith and James Taylor to pick him.

I played with Joe when he was a very young man, you could see he was a fantastic natural athlete, a brilliant mover, talented batter, bowled leg-spin and everything came very easily to him, said Smith, adding that Denly still possess the class he had when he was young.

I think with players who get opportunities late in their careers you just want to know that touch of class is there, and there definitely is with him.

However, Smith categorically stated that these selections are not with the vision of finding the next Alastair Cook and went on to explain the decision to retain Keaton Jennings, who had a horrible time against India in the home series, averaging under 20 in the five Test matches.

We are here talking about how are you going to replace Cook and what a hole he leaves it s a wonderful career and deserves every superlative going but he didn t find opening the batting in England in 2018 very easy. (Jennings) has come through a really tough summer and sometimes in international sport getting through something difficult can put you in good stead, he added. 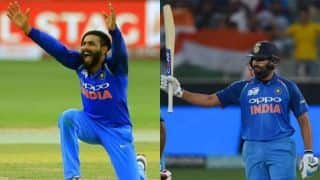