Another loss for either RCB or GL could potentially ruin their chances of making it to the top 4.

Royal Challengers Bangalore (RCB) take on Gujarat Lions in Match 31 of the Indian premier League (IPL) 2017 at M Chinnaswamy Stadium, Bengaluru. Both RCB and GL are in desperate need of a win. GL are rock bottom with four points from seven matches and RCB are placed in the sixth position with five points from eight matches. RCB s previous match against Sunrisers Hyderabad (SRH) was abandoned without a ball being bowled. As a result, both teams shared a point each. However, GL suffered a 26-run loss against Kings XI Punjab (KXIP) in the previous match. GL skipper Suresh Raina expressed unhappiness with his bowlers after their poor show in the previous match.Full Cricket Scorecard: Royal Challengers Bangalore (RCB) vs Gujarat Lions (GL) IPL 2017, Match 31 at Bengaluru

This match is a must-win for both the teams if they are to keep their hopes of making it to the playoffs alive. Another loss for either side could potentially ruin their chances of making it to the top 4. RCB will be eager to get back on the field, especially after being bowled out by Kolkata Knight Riders (KKR) for just 49. A batting line-up consisting of Virat Kohli, AB de Villiers and Chris Gayle faced just 9.4 overs as RCB lost by a whopping 82 runs. Although GL beat KKR on Friday, they lost their momentum after succumbing to a defeat in the next match against KXIP.

RCB have won just one out of their last five matches. They are yet to find the right combination. In their last match against KKR, their batsmen failed to deliver, while their bowlers did a terrific job, restricting the former two-time champions to just 131. However, with the quality in RCB s batting, they will not be bundled out so cheaply every match. It can anyhow be taken as a big wake up call for the RCB batsmen. While Mills bowled well at the Eden Gardens, he has been on the expensive side at the Chinnaswamy Stadium, given the small boundaries. As a result, he becomes a tad predictable as he removes the pace of the ball more often than not. Someone like a Billy Stanlake or Adam Milne could come in handy in his place. Both are strike bowlers and will look to get a wicket or two in the powerplay, which is so crucial in this format of the game. READ: Aravind feels RCB can turn things around

We might see Harpreet Singh make his debut for RCB in this match. After repeated chances to Mandeep Singh, he has scored just 65 runs in 7 matches so far. Vishnu Vinod KL Rahul s replacement too has done very little in his couple of games to warrant a place in the side. Harpreet was roped in as Sarfaraz Khan s replacement after going unsold in the IPL 2017 auction. Harpreet in his last T20 innings scored his highest score 92 off 51 for Central Zone against South Zone in the Syed Mushtaq Ali Trophy 2016-17.

RCB have another issue to address whether to pick Travis Head or Shane Watson ahead of Chris Gayle, who has just hit one fifty in his five innings and had a miserable time at the crease against KKR, where he was dismissed for a painful 17-ball 7. However, it would be unfair to single him out for RCB s poor show. He will perhaps retain his place and continue to open with Kohli against GL.

Raina laid emphasis on his bowlers poor show. He said that his batsmen cannot chase down 180 to 190 every match and his bowlers needed to step up. Hence, the decision to rope in Irfan Pathan in place of the injured Dwayne Bravo makes perfect sense. Barring Andrew Tye, nobody in the GL camp has been taking wickets consistently. This is perhaps where Pathan can stamp his authority. READ: IPL 2017: RCB have given me confidence, pushed me beyond my limits, says Kedar Jadhav

GL bowler Shubham Agarwal made his debut in the previous match, but went for 42 runs in his four overs. Basil Thampi, who is tipped to play for India in the future, has also been poor, conceding at over 9 an over at an average 97.50. It is time that he is replaced by someone and that player could very well be Pathan. There is no doubt that Thampi is a great prospect, but his inability to pick up wickets and inability to control runs does not bode well for his team.

Dwayne Smith batting so low down the order does not make sense for GL either. He is barely able to spend any time at the crease. James Faulkner will be an ideal replacement. Faulkner can come in at No. 7 or 8, whack a few and also chip in with four good overs. If Smith does not bat in the top 3, it will not be a gamble worth taking to have him in the side, especially at a time when every point is important. Akshdeep Nath returned to the squad for the previous game against KXIP, but was dismissed for a first-ball duck. Ishan Kishan is likely to replace him.

If GL, are to improve their bowling, they need to make some drastic changes and as a result, Dhawal Kulkarni and Pradeep Sangwan too are likely to come in. Although Thampi s bowling the death could just keep him in the team.

Head-to-head: RCB and GL have already played each other in IPL 2017. RCB beat GL by 21 runs after a blazing innings from Chris Gayle (77 off 38) and Kohli (64 off 30). RCB also have a superior record over GL. In their four meetings so far, RCB have won thrice. However at the Chinnaswamy Stadium, RCB have won two out of two matches. Kohli has 292 runs against GL in four matches the highest between the two teams.

Prediction: RCB certainly have the upper hand over GL, but both teams will go into this match low on confidence and as a result it will be an evenly-matched contest. Rains might play spoilsport once again at Bengaluru. If this match ends up being washed out, both GL and RCB will virtually be out of contention to make it to the playoffs of IPL 10. 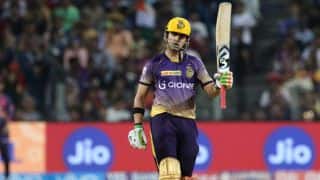 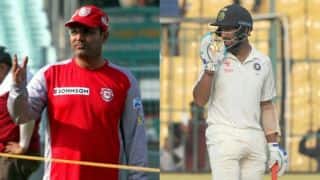