Ajinkya Rahane was unbeaten on 91 against Delhi Daredevils.

Awarded Man-of-the-Match for his unbeaten 91 against Delhi Daredevils (DD), Rajasthan Royals (RR) batsman Ajinkya Rahane said he was not thinking about his own century in an Indian Premier League (IPL) 2015 match on Sunday. He added he was looking to score as many runs as possible that would help team post a good total on board. Rahane (91 in 54 balls) and Karun Nair (61 from 38 balls) helped Royals register their sixth win of the season, beating Delhi by 14 runs on Sunday.  IPL 2015 is still wide open, says Angelo Mathews

“I was not thinking about century at all. I just wanted to play as many shots as possible for the team. As I knew 190-195 would be a good score on the wicket,” Rahane said at the post match press conference here on Sunday. IPL 2015: JP Duminy blames poor batting, fielding, lack of intensity for Delhi Daredevils’ loss against Rajasthan Royals

Rahane said that after he got out for 16 against Mumbai Indians Friday, he couldn’t sleep that night, thinking of how he could improve his game. “After I got out against Mumbai, I couldn’t sleep the whole night. I was continuously thinking about my shot. I was really hurt about that game. And I just wanted to make it count here against Delhi,” he said. Rajasthan Royals beat Delhi Daredevils by 14 runs; return to winning ways in IPL 2015

“I knew that I was batting really well. Once I got set, after six, seven overs I wanted to stay throughout the innings,” he added.  The 26-year-old batsman praised teammate Nair for timely knock, also his bowlers and team fielding for convincing victory. “Our aim was to score 170-175. We got 10-15 runs extra. Credit goes to, Karun batted really well, our partnership was crucial.

“Even our fielding was very good today. We saved around five to six runs on field. Our bowlers also bowled in good areas. It’s a team effort I would say,” Rahane concluded. 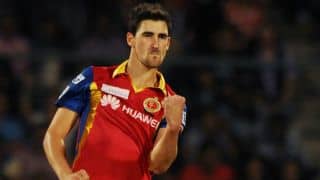