Harris had earlier said that he cherished a burning passion to become an international coach.

Australian Test cricket star Ryan Harris is reportedly set to be named assistant coach of Australia A, which might fulfill his international coaching dreams.

Harris, who is recovering from knee surgery, will reportedly coach the ‘A’ side for a home series of first-class and limited overs matches against India A and South Africa A in July or August.

According to News.com.au, Harris had earlier said that he cherished a burning passion to become an international coach and how Australian coach Darren Lehmann, who is also his good friend, had been tutoring him.

Harris said that he certainly did not expect to ask for this opportunity but he jumped at the chance when the team’s performance boss Pat Howard asked him to be an assistant coach.

The paceman said that he is very fortunate to be offered this position as one normally has to coach for a long time to get that sort of position.

Former Tasmanian and Australian one-day batsman Michael Di Venuto, who is currently the batting coach for Australia, will be the head ‘A’ coach for the matches that will be held in Queensland and the Northern Territory, the report added. 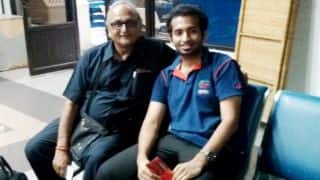