The Kerala Cricket Association (KCA) last week wrote to BCCI requesting it to lift the ban.

Thiruvananthapuram: Kerala Chief Minister Oommen Chandy on Wednesday said his government will do anything for cricketer S Sreesanth as “he is our pride”. Chandy was responding to a question about the former Indian speedster who was absolved of all charges of spot fixing by a Delhi court last month. After being named as an accused by the police following which he was jailed, the state finance department here had removed Sreesanth as the brand ambassador of Karunya — a state government weekly lottery the proceeds of which are used to run a medical reimbursement programme. S Sreesanth confident of playing in ICC Cricket World Cup 2019

“If he wishes to return as the brand ambassador, we will be glad to take him back as its ambassador,” said Chandy, adding that Sreesanth is “our pride”.

Asked if the Kerala government will ask the Board of Control for Cricket in India (BCCI) to lift the ban in the wake of the court clearing him of all charges, he said, “Look, we as a state government have nothing to do with the BCCI. But we do not have any qualms to write to the BCCI as the court has exonerated him. We will do anything for Sreesanth.” BCCI should lift ban on Sreesanth: Kerala Chief Minister

The Kerala Cricket Association (KCA) last week wrote to BCCI requesting it to lift the ban but so far there has been no word from the Indian cricket board.

“Sreesanth is a winner of two World Cups — World Twenty20 and the (50-over) World Cup. We all wish justice is now delivered to him,” said Ravindran.

Sreesanth was the second Keralite to represent the country and has played for India in 27 Tests (87 wickets), 53 One-Day Internationals (ODI) (75) and 10 Twenty20 Internationals (seven wickets). S Sreesanth contemplated suicide after being named in IPL 2013 spot-fixing and betting scandal 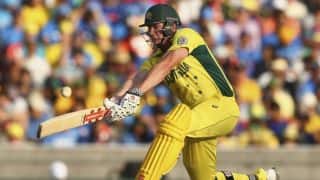