BCCI Ombudsman DK Jain ordered that the two-time World Cup-winner s suspension be amended to seven years and he be allowed to play next year.

S Sreesanth is mighty happy after his ban for alleged spot-fixing was lifted by the BCCI on Tuesday. The Kerala fast bowler, who has played in 27 Tests, 53 One-day Internationals and 10 T20 Internationals, was slapped a life ban in August 2013 along with his Rajasthan Royals team-mates Ajit Chandila and Ankeet Chavan for allegedly spot-fixing in the Indian Premier League.

BCCI Ombudsman DK Jain ordered that the two-time World Cup-winner s suspension be amended to seven years and he be allowed to play next year.

I am so relieved and happy. All these years I have been trying to prove my innocence and the efforts have finally bore fruit. It’s God’s grace that I have finally managed to come out of this and hopefully, I can be active in cricket again,” Sreesanth told MyKhel on Tuesday.

“I am 36 now and next year I will be 37. I have 87 Test wickets and my aim is I want to finish my career with 100 Test wickets. I am confident that I can return to the Indian Test team and always wanted to play under Virat Kohli,” he was quoted as saying by IANS.

In his order, Jain said: I am of the view that banning Sreesanth from participating in any kind of commercial cricket or from associating with any activities of BCCI or its affiliates, for a period of 7 years with effect from September 13, 2013. The date from which, the period of ban imposed by the Disciplinary Committee had commenced, will meet the ends of justice.

Couple of years ago, Sreesanth, 36, tried to migrate to another country to play, but the BCCI had opposed it. He also said that all allegations levied on him are false. He last played for India back in 2011. 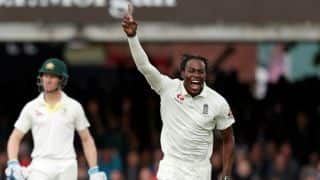