Chasing 192, Malan and Buttler shared 167 to power England to a nine-wicket win versus South Africa with 14 balls left.

Dawid Malan and Jos Buttler’s record partnership helped England made light work of the 192-run target as England produced another dominant performance in white-ball cricket to sweep the series 3-0 at the Newlands Stadium, Cape Town. During the chase, Malan scored a brilliant 99 as he and Buttler combined for the highest second-wicket partnership in men’s T20 international history to gun down the target with 14 balls to spare. The duo registered knitted an unbroken 167-run partnership with Malan ending up with the highest individual score by an English player against the Proteas.

Malan ended up with 99 not out off 49 balls with five sixes and 11 boundaries while Buttler remained unbeaten on 65 off 43 with five sixes and three fours to lead the chase for England. “Great fun, a great run-chase on a used wicket that played better today. Mal’s consistency is phenomenal, the simplicity he bats with, very strong basics, and a lot of confidence and freedom. Some days you don’t feel you are hitting well and get one away, but a couple of boundaries early set up brilliant innings,” Jos Buttler said after the match.

Coming off a half-century in the second match at Paarl, the 33-year-old Malan brutally punished a missed run-out by Proteas captain Quinton de Kock with magnificent innings, he and Buttler taking turns bludgeoning a South Africa attack absent the injured Kagiso Rabada.

Malan accelerated towards his second T20I century but, needing two to reach three figures, made the mental error of taking the single that got England over the line, leaving him hanging his head at the end of a remarkable display.

Malan was adjudged Player of the Match and Series for his exploits with the bat in the 3 games.

Earlier, Rassie van der Dussen – 74* – and Faf du Plessis – 52* – put on South Africa’s record fourth-wicket partnership in T20Is, as they clattered an unbeaten 127 from 10.3 overs to help the hosts reach 191/3. But their performances ended up in vain as England recorded the highest successful run chase at Newlands to register their third 3-0 series-sweep in T20 internationals.

That was the Proteas’ highest score of the series but still proved nowhere near enough to prevent England from as Malan and Buttler (67 not out) put on a devastating 167.

South Africa opted to bat first as they have for all three games in the series with captain Quinton de Kock and Temba Bavuma landing big blows.

However, Chris Jordan came into the attack and broke the partnership as he had De Kock caught by Tom Curran, becoming England’s leading wicket-taker in men’s T20Is in the process.

Fellow opener Bavuma hit two sixes in his 32 from 26 balls but he was caught by Jordan off the bowling of Ben Stokes when trying to lift the ball over the infield, and Stokes then had Reeza Hendricks caught behind by Buttler for 13. At 70/3 from 11 overs, the hosts looked like they would be struggling to post a competitive total but Du Plessis and Van der Dussen built a crucial partnership.

Van der Dussen finished on a magnificent 74 from 32 balls, with five fours and five sixes, as he put on a power-hitting masterclass. His partnership with Du Plessis was also the second-biggest fourth-wicket partnership in men’s T20I history, while their 84 from the final five overs set England a daunting total if they were to take the clean sweep. 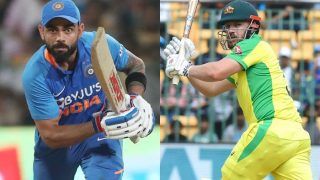