"I was in no mood to do anything. It was such a massive disappointment that I didn't feel like doing anything in those two days." - Sachin Tendulkar

On this day, a decade ago, India cricket hit the rock bottom. After losing to Bangladesh in the group stage of ICC Cricket World Cup 2007, they were engaged in a do-or-die contest against eventual runners-up Sri Lanka. A defeat would mean an early exit from the flagship tournament. After calling it right at the toss, Rahul Dravid invited the opposition to bat first. A collective bowling effort restricted Sri Lanka to 254 for 6. India, however, had a 17-win spree while chasing a year ago. Hence, chasing 255 for a star-studded batting line-up was not that big a task.

But fortunes did not smile upon India. They were bowled out for 185, eventually storming out of the tournament. Sachin Tendulkar, who was then supposedly playing his last World Cup, had a tough time dealing with reality. Nonetheless, he did not give up on his dreams and later went on to lift the trophy in a four year’s time, on his home ground Wankhede. In an interview with mid-day.com, the Indian legend revealed that he had spent two days in his room to get over the debacle. “We were in the West Indies for two days after we lost, but I didn’t leave my hotel room after we lost. I was in no mood to do anything. It was such a massive disappointment that I didn’t feel like doing anything in those two days. It was tough to get that out of your mind and move on to the next tournament.”

“I never thought we would lose to Bangladesh. We were not over-confident, but you do feel confident about India beating Bangladesh. It was one of those uncertainties of the game,” added Tendulkar.

Tendulkar, in his biography, had shed light on the then coach Greg Chappell‘s failure to maintain balance. He, nonetheless, stuck to his opinion. “Yes, 100 per cent, absolutely Greg (Chappell) was responsible for this imbalance and I stick by what I said (about Chappell having a lot to do with the mess Indian cricket found themselves in). The guys who were opening in South Africa which was our previous tour, were batting in the middle order. There were so many changes that were made. If I were to bat at No. 4 in the World Cup, why was I opening in South Africa? And he had no answer to that. Anything and everything that was happening was not in the right direction for the team.”

Cricket, like life, throws its uncertainties and lands you in the roughest of storms. Tendulkar, for that matter, was no exception. “I was so disheartened! You feel terrible that the game which has shown you the best days of your life was now showing you the worst day of your life. I couldn’t imagine cricket could do this to you. I felt really, really terrible. I felt low and I didn’t leave home for quite sometime.”

Amidst all this, Tendulkar had received a call from West Indies legend Viv Richards. “I was away when I got a call from Sir Viv Richards. He spoke to me for around 45 minutes about the ups and downs in cricket. He stressed that I have plenty of cricket left in me and said, ‘You are not going to retire now.’ He had heard from a friend of ours that I was really depressed to a point that I was literally thinking of retiring. He told me that it’s only a matter of time that I get back so don’t take any decision now.”

Above all, Tendulkar agreed to the fact that the Dravid-led team was capable to winning the tournament. “The Indian team of 2007 was a good one. It was not handled properly and the right resources were not used. I repeat, it was a good side because the same players stuck together and played some amazing cricket and went on to become No 1. in Test cricket and won one-day competitions and the 2011 World Cup.” 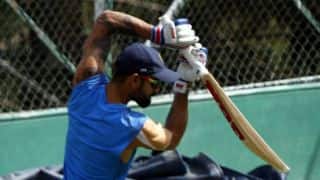