England captain Alastair Cook insisted India batting great Sachin Tendulkar‘s all-time record for Test runs had yet to come into his sights even though he had surpassed one mark set by the ‘Little Master’. Cook became the 12th player in history to score 10,000 Test runs during England’s nine-wicket win in the second Test against Sri Lanka at Durham to take an unassailable 2-0 lead in the three-match series ahead of Thursday’s third Test at Lord’s. The left-handed opener was also the first Englishman to achieve the feat and, at 31 years and 157 days, the youngest to get to the landmark, breaking Tendulkar’s record by more than five months. ALSO READ: Alastair Cook not convinced by quality of pink balls in day-night Tests

Cook (10,042 runs in 128 Tests) is, however, nearly 6,000 runs short of retired star Tendulkar’s record aggregate of 15,921 runs from 200 Tests. The England skipper has 28 Test hundreds to his name, with his runs having come at an average of 47, whereas Tendulkar bowed out with a record 51 centuries at an average of nearly 54. ALSO READ: Alastair Cook has it in him to surpass Sachin Tendulkar as Leading run-scorer in Tests, says Trevor Bayliss

“Six thousand runs is a long way away,” Cook, speaking at Lord’s, said Wednesday. “It was set by an incredibly talented genius. I’m no genius and Tendulkar is, so that is a long way ahead. I want to play for England for as long as I can and at the moment I’m really enjoying it. I am really motivated and hungry and where that takes me who knows.” Cook added: “I’ve never lived my life by saying where I want to get to publicly. In private you have a few goals you want to try and achieve, but at the moment a lot of my goals are very immediate with this England team and as a captain that takes me away from personal milestones as a batter.”

Nevertheless India hero Sunil Gavaskar, the first man to score 10,000 Test runs, said last week that Cook had it in him to set a new aggregate record for most Test runs because of his age and the fact that England play more games over the long format than many other nations. 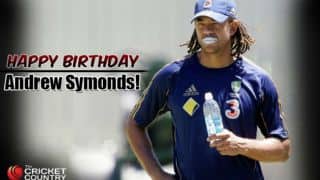