"The message which started circulating everywhere was that whichever tournament MS Dhoni as captain has had a tied game, he has gone onto win the tournament." - Sachin Tendulkar.

It is often said that you can’t win big tournaments without ‘luck factor.’ But, on the contrary, a team cannot alone rely on luck for lifting major ICC trophies. MS Dhoni, apart from smart cricketing sense and good team work, carried a bit of luck in process of winning some big titles under his realm as Team India skipper from 2007-2016. In fact, he even had fortunes’ favour while claiming trophies for Chennai Super Kings (CSK). From IPL 2010, Champions League 2010, 2007 World T20I and 2011 World Cup, Dhoni won it all but had a strange connection with ‘tied encounters’ in every such instance. Victories in all above mentioned tournaments had Team India, or CSK, involved in one tied match at least. Hence, after India’s nail-biting tie versus England in 2011 World Cup group stage, the team became more assured of winning the World Cup.

Sachin revealed: “The message which started circulating everywhere was that whichever tournament Dhoni as captain has had a tied game, he has gone onto win the tournament. If you notice his first IPL, CL T20 win, 2007 WT20I all had a tied game. So we started believing that okay, that means we are going to win the World Cup?”

It had its own momentum, rhythm

On winning the World Cup and celebrations that followed, Sachin had a quirky revelation. “We were all celebrating. Nobody was allowed to shut the door. Each and every room had their own music going on. In our room, for a change, I had a flower stuck here and there and we were dancing (which I have never done before btw). That was a special moment for us. Something we cannot imagine. We didn’t know how to express ourselves, but it had it’s own momentum and rhythm. All the friends and players got together and the celebrations carried on till 5:30 AM (IST),” concluded the Master Blaster. 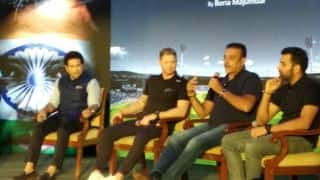