Dipa Karmakar narrowly missed out on bronze medal in Rio 2016.

New Delhi: Cricket icon Sachin Tendulkar on Monday joined millions of Indians and celebrities from all walks of life to congratulate gymnast Dipa Karmakar, who missed bronze medal by a whisker at the ongoing Rio Olympics. Dipa came tantalisingly close to end up fourth with a difference of only 0.150 points with the bronze medallist in the women’s vault finals. Tendulkar, who was in Rio recently to encourage the Indian contingent, took to twitter to congratulate the young Tripura girl. “Winning and losing is a part of sport. You have won millions of hearts & entire nation is proud of your achievements,” Tendulkar tweeted. READ: Rio Olympics: Indian contingent gets cricketers’ support

Indian opener Shikhar Dhawan tweeted: “Congratulations to you and your coaches @dipakarmakar for placing the tricolour at the forefront of world gymnastics. Proud #dipakarmakar”. India’s lone individual gold medallist Abhinav Bindra was among the first to congratulate Dipa via the micro-blogging site. “Dipa Karmakar you are my hero,” tweeted Bindra, who also narrowly missed a bronze medal. READ: Sachin Tendulkar meets IOC President Thomas Bach in Rio de Janeiro

Bollywood superstar Amitabh Bachchan wrote :”#DipaKarmakar…the pride of India…your story is what compels us to do better… and we will!!Many congratulations!!” National award winning actress Vidya Balan tweeted :”Shabaash Dipa Karmakar!!Loved watching you.. We are Pro(u)dunova of you!!”

Tendulkar was the India’s ambassador to the Rio Olympics. He won the Bharath Ratna a few years back for being the world record holder for most runs and centuries in Tests and One-Day Internationals (ODI). Tendulkar was also the first player to score a double century in ODIs. He was also the brand ambassador for the ICC World Cup 2015 held in Australia-New Zealand. 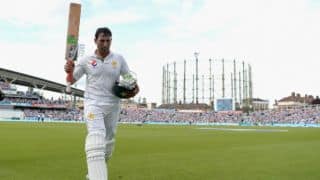