Mumbai: Stressing on the importance of job security in sports, cricket icon Sachin Tendulkar on Sunday urged big companies and MNCs to start employing sportsman. “I think one change which has taken place in Mumbai Cricket, is not for good, which I am not so pleased about, is the job recruitments. Let me take this opportunity to express myself little more. I think, earlier there were less contracted players, players had security of a job which is missing in today’s world. I think that brought out the best in players as far as financial security was concerned. They need not have to worry of all those things and be focused on the game. And that had a solid result, a positive result as far as Mumbai Cricket was concerned. Players were able to deliver, yes I am not by any means saying that players today are not giving their best or not performing well, but that job security somewhere down the line is missing,” the 43-year-old player said. LIVE Cricket Scorecard: India vs England 3rd Test at Mohali

The right-handed batsman was speaking at the prize distribution ceremony of the 69th Police Invitation Shield Cricket tournament 2016-17 at the Mumbai Police Gymkhana. Tendulkar, who played 200 Tests, also said, “I would use this platform to urge to all our mega-[big] companies, multi-nationals to start employing sportsman. Give them little more support, security.” Virat Kohli: I tried to fight comparison with Sachin Tendulkar

He also praised Mumbai Cricket Association for giving nod to his idea of 14-a-side teams at the school level. “Also recently I noticed that Mumbai schools [have] finally adopted my suggestion, which I had made in 2013 when I retired, of using 14 players. And I would like to congratulate MCA and thank them for all the support. Though it came little late, its better late than never,” he said. VIDEO: Sachin Tendulkar shares anecdotes of training under Ramakant Achrekar

“The idea was to have 14 member squad and give more opportunities to players. To me, I feel, inter-schools the career is possibly 48 months, if you end up playing for 4 years, and out of those, if you are playing knock-out games and you don’t end up playing because of the pitch conditions. I mean, on a turning track, why would a coach want to play three fast-bowlers, he would play three spinners and fill the other gap with batters or an all-rounder, but very unlikely to have three fast bowlers,” said Tendulkar. Sachin Tendulkar, Chris Martin meet school students at Global Citizen of India 2016

“What it does, 14 member squad is it increases standard of playing, it raises the standard of playing which may be.. it may not reflect right now, but in time to come, you will start seeing the results,” he added. Tendulkar further explained: “There will be proper batsman batting at all times and they will have to score runs against proper bowlers. You will also get to play a lot of variety as far as the bowling attack is concerned, you will have right-arm fast bowler, left-arm fast bowler, off-spinner, leg spinner, left-arm spinner, you will have to have more guys engaging, you will have to raise their interest levels as much as possible. When you are 12-13, you don’t realise, the years are passing by and you are not playing school cricket and it is quite disheartening.

“I feel for children when they leave home, it is extremely important, they either bowl one delivery or bat, they should know that I am either going to bat or bowl, and that is when the parents are going to start supporting them. But once they know, the kid has not played the whole year, the kid is back home without playing a single bowl, that is where the interest levels drop and the parents don’t support their children enough. I think it is extremely positive move by MCA and Mumbai schools,” said Tendulkar.

The Tournament was won by Karnataka Sporting Association, who defeated MIG Cricket Club in the final. Senior Mumbai Police officials Anup Kumar Singh, Deven Bharti among others were present on the occasion. 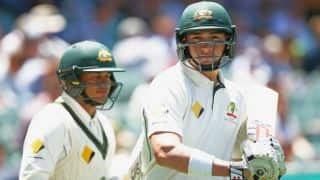