Tendulkar's period of disillusionment dates back to 1997 when the Indian team was touring the West Indies.

He might be revered as the ‘God of Cricket’ but there was a phase in Sachin Tendulkar‘s awe-inspiring career when the batting maestro felt so “scarred” and “devastated” by the Indian team’s ineptitude under his captaincy that he wanted to completely move away from the sport.

The 41-year-old former batsman, who claimed almost every record that is there to be taken in international cricket before calling it quits last year, has finally opened up about the dark days he survived in a career which spanned over two decades.

In his autobiography ‘Playing it My Way’, to be released worldwide on November 6, the much-admired but reticent batting legend has dwelled on the frustrations he faced during his reign as captain — a phase which is considered the biggest debacle of his otherwise enduring love affair with cricket.

“I hated losing and as captain of the team I felt responsible for the string of miserable performances. More worryingly, I did not know how I could turn it around, as I was already trying my absolute best,” recalls Tendulkar in the book, the first exclusive excerpts of which are with PTI.

“I confided in (wife) Anjali that I feared there was nothing more that I could do to stem the tide of defeats. Losing a string of very close matches had left me badly scarred. I had given it everything and was not sure that I could give even 0.1 per cent more. …It was hurting me badly and it took me a long time to come to terms with these failures. I even contemplated moving away from the sport completely, as it seemed nothing was going my way,” reveals the diminutive right-hander in the much-awaited book co-authored by noted sports journalist and historian Boria Majumdar.

Monday 31 March 1997 was a dark day in the history of Indian cricket and definitely the worst of my captaincy career. And yet it had promised so much.

This period of disillusionment dates back to 1997 when the Indian team was touring the West Indies. After drawing the opening two Tests, the Indians seemed to be heading for a victory in the third, chasing a mere 120. But in an inexplicable disaster, the tourists were bowled out for 81 with only VVS Laxman managing a double-digit score.

“Monday 31 March 1997 was a dark day in the history of Indian cricket and definitely the worst of my captaincy career. And yet it had promised so much. In fact, over dinner at a restaurant in St Lawrence Gap in Barbados the night before, I remember having a joke with the waiter, who was predicting a West Indian win. He was confident that Ambrose would bounce India out the next morning,” Tendulkar writes.

“Now, in the first innings of this match, Franklyn Rose had bowled me a bouncer and I had pulled him into the stands for six. So I reminded the waiter of the shot and jokingly said to him that if Ambrose tried to bowl me a bouncer, I would hit him all the way to Antigua.

“I was so confident of our chances that I pointed to the fridge and said he should immediately chill a bottle of champagne and I would come and open it the next day and pour him a glass to celebrate winning the match,” Tendulkar says in the book.

“Instead, we collapsed for a miserable 81 all out, handing the West Indies a 38-run victory. Frankly, there can be no excuses for such a poor batting effort, even though it was a difficult track. I certainly don’t want to point fingers at anyone for the defeat, as that’s not my way. In any case, I was part of that team and as captain it was my responsibility to steer us to victory. I did not get the feeling that we were over-confident, yet none of the batsmen apart from Laxman even reached double figures in the second innings and it was one of the worst batting displays I have been part of,” he adds.

In fact, for Tendulkar, who retired with a mammoth 15,921 from 200 Tests and 18,426 runs from 463 ODIs, the defeat was so painful that it still rankles whenever he travels down memory lane.

“I myself got out for just four. In my anxiety to get a feel for the ball I got a tentative edge. I should either have left the ball alone or tried to counter-attack. The defeat left me totally devastated and I shut myself in my room for two whole days trying to come to terms with the loss. I still feel the pangs of that defeat when I look back at the series,” he says.

At the end of the match I called a team meeting and lost my cool with the boys in the dressing room. I spoke from my heart and said the performance was unacceptable. I said that losing matches in which the opposition play better cricket is one thing. I had no problem with such defeats but losing a match that we had completely under control suggested there was something seriously wrong with the team.

Dwelling further on the Caribbean catastrophe, Tendulkar said the ODI series which followed the five-day games added to his misery as the team lost 1-4, leaving him in a state of fury, which he just could not control in a dressing room meeting.

“After eventually losing the five-Test series 0-1, we went on to lose the ODI series as well. The good start to the tour had given way to a complete lack of application and that proved catastrophic in the end. The best example of this ineptitude was the third one-day game, at St Vincent, where we needed 47 runs to win off the last ten overs with six wickets in hand. Rahul Dravid and Sourav Ganguly had set up the platform and we should have strolled to victory,” Tendulkar recalls.

“Again and again I instructed the batsmen not to go for big shots and to play along the ground, saying there was no need for any risk-taking with the asking rate under five runs an over. However, all our middle- and lower-order batsmen kept playing the ball in the air. The loss of a few wickets resulted in panic, which in turn led to a number of suicidal run-outs. It was infuriating to see the team lose from a winning situation,” he said.

“At the end of the match I called a team meeting and lost my cool with the boys in the dressing room. I spoke from my heart and said the performance was unacceptable. I said that losing matches in which the opposition play better cricket is one thing. I had no problem with such defeats but losing a match that we had completely under control suggested there was something seriously wrong with the team.”

It took some combined words of encouragement from the legendary bowling duo of leg-spinner Anil Kumble and medium-pacer Javagal Srinath to calm a devastated and disillusioned Tendulkar.

“I was extremely upset with the way we were playing and both Anil and Srinath came to my room in the evening to try and calm me down. Anil said that I should not blame myself for the defeats and that we would learn from the mistakes we had made in South Africa and the West Indies. However, things were really starting to get on top of me,” he writes.

Ultimately it was Anjali, who helped Tendulkar deal with the debacles during his reign as captain and carry on. “Anjali, as usual, managed to put things in perspective and assured me that things would surely get better in the months to come. Looking back, it was just frustration getting the better of me,” he said. 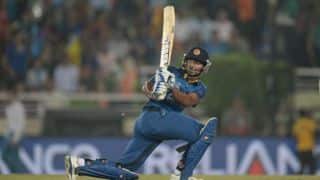