Former cricketers Inzamam-ul-Haq and Mohammad Yousuf were also present at the pilgrimage in Mecca.

Saeed Ajmal, Azhar Ali and Abdur Rehman were among the several Pakistani cricketers snapped together while performing Hajj, or the annual Islamic pilgrimage. Both Ajmal and Rehman, aged 37 and 35 respectively, are not part of any of the Pakistan squads for the upcoming home series against England, which is scheduled to start from October 13 in the United Arab Emirates (UAE). Among the other Pakistani cricketers spotted in the city of Mecca were Sarfraz Ahmed and Asad Shafiq, both of whom, along with ODI skipper Ali, are important members of the Test a squad that was announced. Former cricketers Inzamam-ul-Haq and Mohammad Yousuf were also seen at the pilgrimage. The Pakistan cricket team is known to be deeply religious, and are often seen offering namaaz (prayer) together before the start of practice sessions. READ: Aamer Khan meets Shahid Afridi in Mecca

Pakistan are currently gearing up for a long tour against a resurgent England side on ‘home’ soil, with the latter heading to the UAE following a 3-2 victory in the 2015 Ashes. The Pakistan Cricket Board (PCB) had announced the Test squad on September 16, with 41-year-old Misbah-ul-Haq being retained as the captain of the team. Misbah, who was handed the reigns of captaincy following the 2010 spot-fixing scandal, quashed all talks of him retiring soon and said that he would think about it only after the tournaments against England. The two sides battle it out in the first Test at the Sheikh Zayed Stadium in Abu Dhabi on October 13, with the ODI and T20I series set to begin from November 11 and 26 respectively. READ: Misbah-ul-Haq’s decision to shelve retirement plans a blessing for Pakistani youngsters 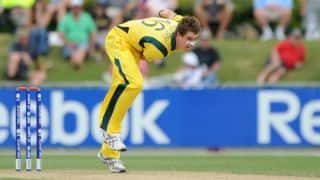