Mohammad Hafeez is in India with the Lahore Lions for the CLT20 2014.

Having faced the heat of ‘chucking’ himself, all-rounder Mohammad Hafeez on Wednesday termed teammate and ace spinner Saeed Ajmal‘s suspension for illegal bowling action as a “difficult thing not only for Pakistan but for the entire cricket”. “This is a tough thing not only for Pakistan but for rest of the cricket as he is a number one bowler. It’s too early to comment on this as PCB is looking into the issue,” said Hafeez in a reply to query on Ajmal’s suspension over chucking.

Hafeez, captaining Lahore Lions, is in the city to take part in Champions League T20 (CLT20) 2014, starting on September 13 at Shaheed Veer Narayan Singh Stadium in Raipur. Hoping that Ajmal will stage a good comeback, off-spinner Hafeez, who was once reported by umpires for suspect action but later cleared by the ICC, said, “As a player I am a good friend of him (Ajmal) and a well-wisher. My wishes are with him. He is one of the entertainers in our team. I hope he will overcome this adverse situation and will make a better come back.”

When asked about the team practice ahead of the tournament, he said, “In Lahore, the weather was not good for one-and-a half weeks, so we couldn’t do some outdoor practice but we spent some time in indoor. I think we are getting the similar weather here as well. Although, we have a practice session following which we will soon acclimatise to the situation.”

Hafeez said that playing cricket in India is always enjoyable. “We have a bunch of international players and some budding players who have played domestic matches, for the tournament. It’s going to be a great platform for them so they should deliver their best,” he said.

Responding to a query on performance of other teams, Hafeez said, “I think all teams are good. Pressure is on every side as this is the stage when you have to qualify for the main round. Whoever will play right will go further.”

Lahore Lions are scheduled to play their first qualifier against Mumbai Indians on Saturday. Hafeez said that Mumbai will certainly miss Rohit Sharma’s services as a player and as a leader after the batsman was ruled of the tournament due to a fractured middle finger. Sharma suffered the injury in the second one-dayer against England in Cardiff and missed the remaining three games and the one-off T20 after that.

“Mumbai Indians will miss the leadership of Rohit Sharma. He is a very good player of the side. Still they have a good team and we are ready to take on them,” Hafeez said. On Indo-Pak relations, Hafeez said that sports should be kept out of political interference.

“I have been to India for 7-8 times and we enjoyed playing here. I think there is a lot of love between people of both the countries. No political issue should be brought into sports,” he said. 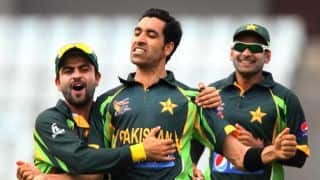