Hapless Pakistan rattled by Samuel Badree, Sunil Narine to fold up for 82.

West Indies sailed in to the semi-final of the ICC World T20 2014 with an emphatic 84-run win over Pakistan at Dhaka on Tuesday. Chasing 167 to win, Pakistan crashed at the start to 13 for four in the first powerplay. The pressure This is the first time Pakistan have failed to qualify for the semi-finals of a World T20. The match-winning performance was the 71-run stand between Darren Sammy (42 not out) and Dwayne Bravo (46). Pakistan conceded 82 runs in the last five overs and they scored that much in their entire innings.

West Indies won the toss and chose to bat, but were kept in check by Pakistan. Chris Gayle and Dwayne Smith fell early as Sohail Tanvir bowled a tight spell. Then the spinners came on and strangled the West Indies. For the first ten overs, they were moving at a run-a-ball with Marlon Samuels and Lendl Simmons moving fairly well.

However, that is when Pakistan hit back and had Samuels, Simmons and Denesh Ramdin out in the space of three overs. At 81 for five in 14 overs, things looked bleak for West Indies. But then, Darren Sammy and Dwayne Bravo came together to construct a brilliant partnership. In the last five overs, they smashed 82, 59 coming off the last three.

Everything changed in the 18th over when Umar Gul went for 21 with Bravo smashing two huge hits off the first two balls. The next over, by the trump-card, Saeed Ajmal went for 24 as Bravo smashed two hits over mid-wicket and Sammy sent one into long-on. Bravo fell in the last over, but Sammy ended in a flourish to take West Indies to 166, a total that seemed impossible at one stage.

Pakistan’s innings went downhill from ball one. Ahmed Shehzad, the centurion of the last game was trapped plumb in front off the first ball of the innings by Krishmar Santokie. But then, Samuel Badree came to bowl. He had Kamran Akmal in the second over as he lofted him straight to mid-off. And, it just got worse from there. Umar Akmal was stumped in the fourth over as he chased a wide one. The same thing happened to Shoaib Malik when he went down the track in the sixth over. Badree bowled a spell of four overs for 10 runs with three wickets.

From 13 for four in the sixth over, Pakistan never recovered. Shahid Afridi did entertain the crowd with a couple of big hits, but that wasn’t going to help them on the day. Even Narine took a cue from Badree as he too had two batsmen stumped. Thus, in all, four Pakistan batsmen were stumped.

West Indies continued to take the game by the scruff of the neck and won it in the 18th over. 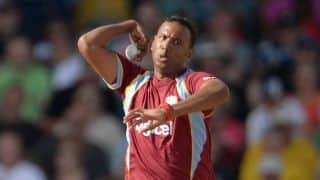 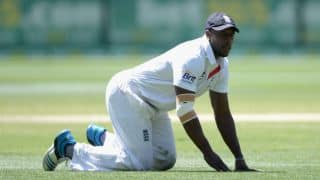