Mumbai, Former India batsman Sanjay Manjrekar feels one reason for the recent dwindling dominance of oft-crowned Ranji champions Mumbai could be because other teams are getting stronger.

Even in this season’s Ranji Trophy, Mumbai have been made to wait till the last league game to try and seal their knockout spot.

The 41-time champions need to beat Tripura in their last Group C league game, commencing on November 25, to make it to the quarters.

Last year, Mumbai were beaten by Gujarat in the final held in Indore.

“May be one reason is that the other teams are getting stronger (in the Ranji Trophy). Earlier Mumbai and a couple of other metros who were dominant, now the small town boys are playing with the same kind of ‘jigar’ (enthusiasm),” Manjrekar said yesterday.

“There are more players from around India who are putting up a stiff competition,” he said.

The topic came up at the discussion after Manjrekar and former Mumbai opener Lalchand Rajput released a book, ‘Spell-binding Spells’, penned by Anindya Dutta.

Manjrekar also believes that in the early Mumbai teams, there was one India player, who was captaining the side and that is somehow missing in the present team.

“And the other reason, if we look at all the good Mumbai teams, there was always an international player captaining them, that’s where somehow (they) were able to rub on the right kind of culture,” he said.

“I played under Sandeep Patil and he made sure that the message was passed on from the highest level to those players. That link, I think, is missing,” added Manjrekar.

Rajput, a domestic bulwark who scored tons of runs in domestic cricket before going on to play for India, echoed similar views, while pointing out the positive influence of the Indian Premier League on other teams’ players.

“That is one of the reasons, yes, other players (apart from Mumbai) have also started (playing well). The second part is the IPL. A lot of players become more mature by rubbing shoulders with national stars. So they become more confident,” he said.

“I will give you an example, if Gujarat was playing against Mumbai, they would get out before the match started, they would say ‘do din me khatam hoga ya ek din mei’ (will it get over in two days or one day),” said Rajput, who now coaches Assam.

Rajput, who was the Indian team manager for a brief time, also believes that the mindset of opposition players is changing when they take on Mumbai.

“But now the players are saying ‘Bombay ko mar sakte hai’ (we can beat Bombay), the mindset is changing. It all depends on the mindset and other players have started believing that we can beat the best team,” he signed off.

Mumbai recently played their 500th Ranji game versus Baroda and were made to struggle for a draw after conceding the first innings lead.

Even their next game against Andhra Pradesh in Ongole ended in a draw after Mumbai gained the first innings lead. 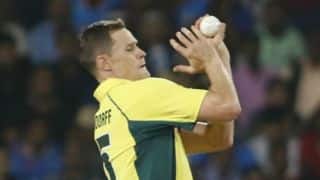 The Ashes 2017-18: Comments like 'unnameables' gives you extra incentive to make statements, fires back James Vince